“I want to pause here and talk about this notion of consensus, and the rise of what has been called consensus science. I regard consensus science as an extremely pernicious development that ought to be stopped cold in its tracks. Historically, the claim of consensus has been the first refuge of scoundrels; it is a way to avoid debate by claiming that the matter is already settled. Whenever you hear the consensus of scientists agrees on something or other, reach for your wallet because you’re being had.

Let’s be clear: the work of science has nothing whatever to do with consensus. Consensus is the business of politics. Science, on the contrary, requires only one investigator who happens to be right, which means that he or she has results that are verifiable by reference to the real world. In science consensus is irrelevant. What is relevant is reproducible results. The greatest scientists in history are great precisely because they broke with the consensus.

Yesterday was an odd day. Per usual I attended the annual Nashville Chamber of Commerce Education Report Card presentation. Every year the Chamber assembles a committee to take a deep dive into Nashville schools and then they issue a state of the school’s “report card”. In the past, this has been a very contentious affair.

The business community, unsurprisingly, is driven by their own interests. Interests that don’t always align with those of parents, nor reflect what is actually transpiring in schools. As a result, their findings are often, debated and ultimately ignored.

Sure every year they report back on the status of last year’s recommendations, and some have been adopted, but it is never clear whether it is due to causation or correlation. This year though the whole tone was different.

To begin with, the air was more welcoming. In the past, I could walk the corridors outside the presentation like the ghost of Christmas past, my presence mostly going unacknowledged despite regular conversations with most in attendance.  This year I enjoyed the opportunity to mix mingle with everyone, those whose ideology I share and those I don’t. Dr. Battle even stopped and gave a warm greeting when I said good morning. Thake that Shawn Joseph. I must admit it was a little discombobulating.

Every year the chair of the MNPS school board is asked to address the assembled body. Due to unforeseen personal circumstances, Chair Anna Shepherd was unable to fulfill this year’s invite. As a result, the address would be delivered by vice-chair Amy Frogge. That on its own should have set the world off its axis.

To say that Frogge has long had a contentious relationship with Nashville’s business community would be an understatement. In neither of her two election cycles has she received their endorsement and members have individually spent hundreds of thousands of dollars in order to try and defeat her. Efforts that have failed miserably, as in both elections Frogge soundly defeated her opponents. Add that to the fact that during her tenure, she has ranked as one of the board’s most popular members, and it’s safe to say that her words have not been welcome at chamber meetings.

Initially wary about taking advantage of circumstances, Frogge boldly faced the crowd head-on and ultimately used the opportunity to carry her important message into the proverbial lion’s den. And while she wasn’t unpleasant, she didn’t waste time on needless pleasantries,

“Good morning. I would like to start out this morning with a confession, speaking only on my own behalf: Since I was first elected, I’ve bristled at the very idea of the business community grading the school system with a yearly report card. If I, as a school board member, decided to ‘grade’ the Nashville Chamber for the dismal state of Metro’s finances and offered suggestions as to how you might better conduct your business dealings to avoid such poor outcomes, I’d wager that you would take offense. You would likely respond that I’m not qualified to make such an assessment, since I have no background in business, and you’d be right.”

From that opening salvo on, Frogge outlined a message that called for respect of teachers and support of public education. In a moderate tone, that belied the strength of her words, he issued a call that was aimed at Nashville but whose relevance echos across the country. I strongly urge you to watch and share her message.

There are some that took exception to things she said. They choose to point out that she claims to send her kids to a zoned school when one in actuality attends an arts magnet school. Is this important? Maybe. We all choose to focus on what we choose to focus on.

For me, I choose to focus on her call to supply greater resources to our schools, to respect the people charged with taking care of our kids, to stop the overreliance on tests that are an inaccurate portrayal of our schools, and to treat investment in our schools as an investment in our community. calling on all of us to engage in public education policy as a matter of civic duty. I am particularly proud that she pointed out public schools shouldn’t be considered a charity, open as a promotional vehicle for the city paper.

I will note that the room was very quiet while Frogge spoke and one suited man near the back of the room was heard to say to a friend, “I may have to go out and throw up over this.” He’s also certainly entitled to his opinion, and time will tell if his opinion is one shared by the community at large. Personally, I think he’s going to find himself in the minority.

After Frogge dropped her manifest, the chamber presented its recommendations for this year. A summation of which is, we need to develop a plan for the future that truly assesses the needs of the district and also spells out what fully funding our schools really means. They also recommended that the Equity and Diversity leadership position and department be reinstated. These are not unreasonable asks and I do believe they represent essential elements of a larger conversation that needs to be had.

For me, the most valuable take away from the chambers report card is the printed booklet that they produce every year. This year, I find it especially valuable. Included are a number of data tables that I’d like to share with you.

The first chart would be on discipline numbers. Despite a focus on not suspending kids, the numbers are moving in the wrong direction. This exposes the reality of a discipline policy that is serving no one well and cries out for deeper examination. Teachers and students don’t feel safe in our schools while we fail to reduce the number of kids removed from those same schools. That can not remain a consistent picture going forward.

The chamber acknowledges that and calls for more professional development around restorative practices and mental health supports for schools. Personally, I continue to maintain that the conversation needs to shift away from keeping kids in schools and instead focus on getting them the services they need, wherever that may be. 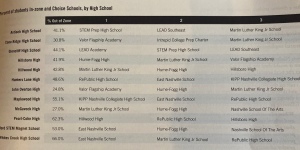 The next chart I want to call your attention to is one showing the percentage of students opting out of their zoned schools to attend other schools, and the top choices of those students. White’s Creek, Pearl-Cohn, and Maplewood – unsurprisingly – have the most students going out of zone. Overton, McGavock, and Cane Ridge have the lowest.

Overton, I’m especially proud to say, has less than a quarter of eligible students choosing a different option. Keep up the good work Bobcats!

Next, is a chart that shows the districts of each school board member and the number of schools and students in their district. This one is an eye-opener. Look at District 5 – 42 schools and 8,691 for an average of 207 students per school. District 6, in contrast, is 20 schools and 16,865 students for an average of 843 students. District 5 is 82.4% non-white, while district 6 is 79.2% non-white. In district 5 those numbers are made up primarily by Black students, in District 6 they are Hispanic. Hmmm…seems like an equity conversation needs to take place around these numbers. 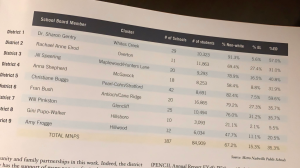 Numbers that also dramatically illustrate the need for some school consolidations in the Pearl Cohn/Strattford cluster. I know that’s not a popular sentiment but I can’t help but believe that consolidation would free up enough resources to allow students to receive greater opportunities than they are being offered currently. I think that a real conversation about consolidations needs to be one of the first conversations after a new director is hired.

The last one I want you to study is the student demographic charts for the last 5 years. In 2016/2017 the district grew by roughly 800 kids. Since that high point, the district has shrunk back to a little less than a thousand fewer students then it served in 2015/2016, roughly an 1800 student swing. This year MNPS has lost 468 as compared to last year. Should be some concern around those numbers.

In addition to an overall population decrease, the district has seen a shift in the racial makeup of the kids it’s serving. The number of kids who self identify as white has dropped by 3%. The number of students who self identify as black has dropped by about 3.5%. The Hispanic population, in contrast, has grown by 7% points. Despite this growth, Hispanic students and their needs are the least discussed.

An argument is consistently made to hire more teachers of color to reflect the students they teach, yet, when was the last time you heard an argument to hire more Hispanic teachers? The number of Hispanic principals, if I’m not mistaken, still sits at the embarrassing number of two, and don’t look for a lot of Hispanic faces in leadership roles in central office either because you’ll be sadly disappointed. Again, it sounds like a place for an equity and diversity conversation, but will it be?

In closing, I’d like to give a shout out of thanks to the chamber’s report card committee. Theirs is a thankless, and uncompensated position, and I appreciate the time and effort they bring to the job. I truly appreciate their continued move to being considered a partner in the conversation, as opposed to the past years when they demanded a driving role in the conversation.

In talking briefly after her remarks, both Frogge and I commented on how refreshing this year’s event was. For the first time in my memory, there seems to be more of a scent of collaboration in the air. We owe it to our students to try to seize the moment and build on the seeds that have been sown. Let’s see what happens, but there is room for optimism. Who knows one day I may even get an invitation to join the report card committee.