TN ASD: Brand on the Run 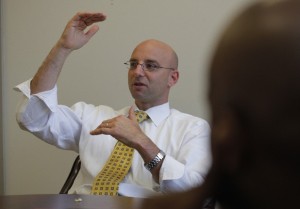 I figure the Tennessee Achievement School District (ASD) and its superintendent, Chris Barbic, are feeling pretty good these days. The legislative session is over in Tennessee, and they’ve managed to beat back the forces of darkness that wanted to abolish, or at least limit, them. (Disclaimer: I consider myself a proud member of those aforementioned forces). In fact, they won the right to go out and recruit extra students. Now, it’s summer time, and people’s attention starts turning to more enjoyable subjects, leaving the ASD ample opportunity to plot their fall shenanigans. But not so fast, my friends.

The newly-won ability of the ASD to enroll students in out-of-zone neighborhoods is a big deal. It allows for the ASD gang to go out and find some kids who will help raise those test scores in ASD-managed schools. Barbic likes to downplay this and say that we’re only talking about maybe 400 students. That doesn’t sound like much, but if you’re familiar with how small the sample size for the annual achievement tests are, you began to understand what a big deal this actually is. Studies have shown that standardized tests do more to measure socio-economic status than student achievement.  Just a handful of the “right” students (i.e., impoverished minority students with highly involved parents) can make results look a whole lot different and give the appearance that the ASD is doing something our public schools can’t.

The other win for the ASD in the recent legislative session is the ability to charge its charter operators an authorizer fee of up to 3 percent for each school’s per-pupil funding from the state. So much for that tag line of “100% going to the student.” Furthermore, this creates the incentive for the ASD to authorize more charters rather than administer schools themselves. Can’t take 3% out of your own wallet now, can you? This becomes especially important because the Race to the Top money, which helped fund the founding of the ASD, is going away, but those large administrative salaries are here to stay.

Fresh from these wins, the ASD is ready to get cracking on expansion. Funny thing, though, is that half of these charter applications are for Nashville. I guess when you start to wear your welcome out in one neighborhood, you have to pick up and move elsewhere. Unfortunately for the ASD, I don’t believe they will find Nashville anymore welcoming than Memphis. But that will not deter Barbic because he’s discovered a new benefit of coming to Nashville. Nashville’s demographics’ more closely resemble Houston’s than Memphis’. Apparently Barbic believes that these are demographics’ that make gains a little easier.

In a recent interview with Chalkbeat, Barbic made this interesting comment: “I think a second lesson is around the depth of the poverty in Memphis and the obstacle that creates in educating our students. Obviously, when we looked at the info on our kids before bringing a school into the ASD, we knew most of the kids we serve are living in poverty and that poverty plays a factor at school. I’ve been doing this for over 20 years and every single school I’ve worked with has been in a community dealing with poverty. But the poverty in Houston, where I worked before coming to Tennessee, compared to the poverty in Memphis, is different. In Houston, it was more of an immigrant poverty. In Memphis, it’s more generational poverty. I think that the depth of the generational poverty and what our kids bring into school every day makes it even harder than we initially expected. We underestimated that.”

This is, frankly, quite shocking coming from a man who subscribes to the “citing poverty is just an excuse” and “all kids can learn” schools of thought. To my admittedly untrained ear, what he seems to be saying is that poverty does matter and some kids are more prepared to learn than other kids. That also seems to run counter to his theory of a “Belief Gap.” Sounds like he believes that children who live in “immigrant poverty” are much more capable of learning than children living in “generational poverty,” as he puts it. Nashville has less generational poverty and more immigrant poverty, so he should be able to test that theory out. Personally, I find it a little reprehensible. Poverty is poverty and needs to be addressed, but at least he’s finally recognizing the role it plays.

The ASD’s attack on Nashville started in earnest last year, and the effects their intrusion has on all schools needs to be recognized, not just the ones that they take over. Take, for example, Inglewood Elementary School in Nashville. Due to test scores, they were on the priority list and subject to potential takeover. But they had a strong principal in place, an extremely talented and committed teaching staff, and increasing parental involvement. In short, they had a plan and were working on it as a community. They were successful in fighting off the ASD but at what cost?

This is what that success looks like. The principal has, because of the uncertainty with the future, transferred to another school. The teachers, again, because of the uncertainty, have explored other options. Parents who were fully committed to sending their children to school there have been scared off by the uncertainty. What you have left now is a school that has been willfully gutted of its resources and is primed to be taken over and turned over. Even though the school fought off the ASD, they’ve been robbed every bit as much as if someone had shown up and held them at gun point. The ASD will tout their supposed successes but nobody will discuss the cost or the lives affected so that they could rack up their data points. It’s my opinion that every politician who failed to rein in the ASD in this past legislative session should have to talk to the administrators, teachers, and parents of that school to see the damage done. That means you as well, Commissioner McQueen.

Fall will be here soon enough and the cold weather will bring new attacks by the ASD, but Nashville will be prepared. We will collect the stories, gather the data, and educate communities about why the intrusion of the ASD is an unwelcome one. While they spend the summer hatching their plots, we will work just as hard to defend our schools and our communities.

One of the best ideas I’ve heard is that we ought to spend the summer emulating the “Occupy” protests and take up residence for the summer in front of Mr. Barbic’s house. He lives in a neighborhood unaffected by either “immigration” or “generational” poverty, so I don’t believe that intrusion would be any more welcome than his into our community schools. Maybe if he learned what it feels like to have your world possessed by unwelcome guests, he’d be a little slower to do the same. Perhaps, if there is enough interest.

I am not making the claim that all is perfect with our schools. Being an urban school district with high poverty and an incredibly diverse population brings a never ending source of challenges. The thing I am claiming is that the best-suited people to meet those challenges are the ones who live in the community. If the state wants to assist in improving their schools, I’ve got a way they can do that: fully fund the BEP. As Mr. Barbic says, “This is hard work, and I think we need to honor the folks who have raised their hands and said, ‘You know what? I want to go into schools and work with some of the most vulnerable kids in the state.’ We need to give the teachers and leaders in the building the space and time to be successful.” Amen, brother, amen.