Home › Uncategorized › What Ferguson Says to Me

What Ferguson Says to Me 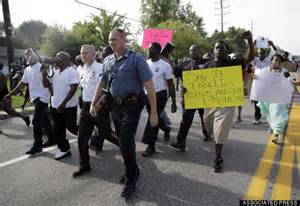 I don’t normally proofread my posts more then once or twice, but talking about race in America is always a bit tricky, so this time I’ve done it a number of times. You always need to parse your words because few will give the benefit of the doubt. If you are African American you don’t want people thinking you’re angry, if you’re white you don’t want people thinking you are racist and if you’re Latino or Asian then you fight to get included in the conversation. That last statement alone will probably get me in trouble because we can’t seem to have a discussion about race without a heightened level of sensitivity. It makes an honest conversation extremely difficult, and something I wouldn’t normally attempt, but the events in Ferguson have moved me to take the risk.

I grew up a military brat and was around low income multi-cultural kids from birth. To me the idea that people would make judgments about other people based on the color of their skin is about the most ludicrous thing I can think of. Growing up and even now with friends, stereotypes are often traded as jokes among friends. Some of the comments are as biting as possible with no mercy shown by any of the participants, black, white or brown. Still there is always an undercurrent of sensitivity beneath it. A sadness that even such material exists. I can remember a time in high school, the jokes between a black friend and myself  went a little far and feelings got hurt. I learned that day that jokes are sometimes just thin Band-Aids over gaping wounds. A lesson that’s been ingrained in me since.

It seems that with each subsequent generation racism becomes less of an issue, yet institutional racism keeps a firm hold. When you start looking at statistics and really talking to people its easy to feel that in some ways we haven’t made any progress. Look at our schools, we’re still trying to find new ways to segregate them. The incarceration rates and death by violence rates of our young black men are mind numbing. Unemployment figures further continue to illustrate the point. Though I do believe institutional racism is more about poverty and keeping the impoverished divided then it is about denying one race or another their rights. It keeps those without focusing on their differences rather then their similarities and then demanding their fair share of the pie.

All my life I hear people say, “Do you know what its like to be arrested just for being white?”. I always answer with a, “Yes I do.” As a young long hair in the south I spent the night in jail for being white. I came out of a bar at 1 AM joking with a friend who was coming in and the police car that was passing by locked up the breaks and had me cuffed in the back seat before I could say, “Yes Sir!”. The next couple of hours were pretty uncomfortable. I was cold, someone offered to buy my sneakers, I was hungry, it was pretty much how those TFA corp members described their night in jail in Ferguson. I’ll never forget the words relayed to me when I was released the next morning, “Tell that Yankee he best watch himself down here.”

I also spent 8 days one time in Metro Jail which gave me a little insight into what it feels like when you don’t look like the people with power. I remember voicing some concern of mine to a guard who responded by telling me, “That’s no concern of mine. Not my job. My job is making sure your skinny little white ass stays alive while you are in here.” Message received loud and clear. I too have been followed in stores by people who took my long hair and leather jacket as a threat. So while I won’t pretend to understand what it feels like to live with that judgment based on the color of your skin, I’ve got a glimpse. Its also a reminder that we need to judge people on their individual experience as much as their collective experience.

As an involved citizen, I watch events unfold nightly on TV, and have to ask why do we only pay attention to these communities when tragedy strikes? There are 100’s of communities like Ferguson across the country. Paterson, New Jersey, Gary Indiana, Cuyahoga County, Ohio, Wayne County Michigan, all are similar. Suburban communities with large non-white populations and high levels of poverty. We are content to let people live in these environments without ever addressing the effects let alone the roots. When violence explodes like its pre-destined to, we latch on and use it to drive our own personal agenda.

Whether its racism, militarization of the police, poverty or whatever rings for us, we pick up the slogan flag and raise it high. We wave it as if our rage alone can solve the issue. How much greater an impact would we have if we actually had these conversations before people were dead and things were burning? What if we made an effort to have a discussion about what our governing boards looked like before they were in a defensive mode? These conversations never take place till tragedy forces us into the ring and even then all we do is retreat to our separate corners and read our lines like actors in a Shakespearean play. Then the tragedy plays out its life span and we retreat to our cocoons till the next incident. Meanwhile after the camera’s leave the citizens of these towns are left to try and put it all together in a town were nothings really changed except the relationships are all just a bit more fractured.

The most alarming thing to me about all of this is the apparent loss of faith in our public institutions. When something like Ferguson takes place we don’t for one minute believe the police, the courts, or any other civic body will do the right thing. We instantly treat them as if they are enemy combatants. We never consider for one minute that this incident may have been the result of one tired, scared police officer who when placed in a situation that would test him, failed miserably. Instead it instantly becomes about the racist militarized police force. There are certainly shortcomings in our institutions but this is not a healthy place for a democracy to live.

The only way this whole democracy thing works is if we all buy into the institutions we have collectively created. We have to believe  that our courts are just. That our leaders have our interests at heart. That the police are there to serve and protect. At this point in our history I’m not sure that the majority of us can say that. We’ve spent decades tearing at out institutions with out ever putting effort into making them stronger and now when we need them they are powerless. This is on all of us.

Did we really think that there would be no consequences to painting teachers as selfish and lazy while creating separate schools because the public ones weren’t equipped to serve us? We constantly talk about the militarization of the police but never once do we discuss the militarization of criminal element. We notarize the politicians that lie and cheat but rarely celebrate the ones that work as true public servants. We are taught to question everything but perhaps the better lesson would be to question everything but make sure you bring some possible solutions.  This lack of faith in our institutions is going to leave us in a very precarious position.

As I watch events unfold, I can’t help but ask, what’s the end game. Will arresting and prosecuting the police officer quell the violence? Will firing every police officer and council member improve lives? Do we marginalize a different group in order elevate the one that was previously marginalized? At the end of the day unless we take collective action before the burning starts we are only doomed to repeat it. Unless we rebuild our trust in our public institutions we won’t have them to lean on when needed. It’s got to be an investment by all of us.

Personally, I believe that a renewed commitment to our public education system would go a long way to restoring faith in our democratic institutions. Show children that the collective matters and that we are all in this from the beginning and they’ll carry that forth into adulthood. Support our teachers and invest in our schools. Stop painting public servants with the broad stroke of being lazy, corrupt and filled with self interest. Maybe I’m wrong but all I have to do is turn on the TV to see that what we are doing now is not working.