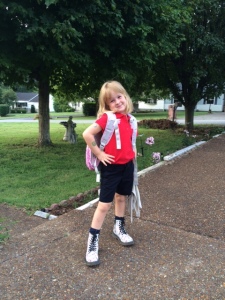 It seemed like just yesterday we were bringing my daughter Avery home from the hospital for the first time and now it was time to send her off to her very first day of kindergarten. Time had literally flown by, but I wasn’t concerned, I was under the misconception that this was going to be an easy day. After all she’s been in day care since she was 6 weeks old. This would be the same, just sending her to a different building. So why was my stomach in such knots?

Avery had been blessed to attend a day care or as we referred to it, school, practically since birth. We were fortunate that we had found one that offered great care and instruction and allowed her to be surrounded by a great group of kids for five years. When we dropped her and her brother off in the morning we always knew she was going to be in a safe environment, surrounded by teachers that loved her and would always look out for her best interests. We had frequent interactions with the staff and it was always apparent that my daughter was getting a strong curriculum that included lots of play time.

In April we enrolled Avery in the school near where her mother taught. We were very excited by the upcoming transition, but as the summer stretched on and we didn’t hear anything from our school district, it began to dawn on me. This was not going to be a continuation of past experience. This was going to be completely unique. We were now part of something much bigger and it was a little unnerving.

School was about three weeks from starting and we still hadn’t heard anything since about a month prior when Avery tested into the gifted program, so I called. “Why no Mr. Weber. She’s not on the roster? Where did you enroll her?” Those were the words that started two days of phone calls and emails that ended abruptly when she was suddenly on the roster. Yes, we were now suddenly part of a much larger system that would take a bit to learn to navigate.

That’s one of the things I think parents need to keep in mind, and I needed to remind myself. Public school systems are massive organizations with multiple moving parts. Its very easy to feel like your concerns are not being addressed. We just need to be patient and stay after it. While we are cutting some slack to the school system though, the school system needs to work on its user friendliness. Too often the pursuit of innovation leads to the neglect of the fundamental. Executing fundamental operations is every bit as important as innovating, yet nobody ever talks about that aspect. I wonder what the narrative would be on a school that had very little innovation but through execution consistently had high test scores. Would they be celebrated alongside the innovators?

Two days before school we attended an open house. We found out who Avery’s teacher was and where her classroom would be. Its funny, when you picture a kindergarten teacher you always picture them to be exceptionally warm and fuzzy. Avery’s was not but several trusted sources spoke of her as a high quality teacher. Once again pre-conception and reality were clashing. The important thing was Avery liked her and felt comfortable with her.

There was a bit of talk about “data” and “having her writing sentences by Christmas”. I explained that I thought that would be wonderful but I wasn’t putting to much stock in benchmarks. The biggest thing I was looking for from this year was for Avery to  get bit by the learning bug. I wanted her to establish a base of excitement for learning new skills at whatever pace. If I’ve said it once, I’ve said it a thousand times, we are trying to raise life time learners not benchmark masters.

The first day arrived and Avery was extremely excited. She’d even taken the time to make an “I love you” card for her teacher. We got her dressed in her uniform and strapped on her little back pack. After posing for some commemorative pictures, we loaded up as a family and headed off to school. As we walked her to her classroom amongst all the other little children the enormity of it all started to hit me and the realization was a little staggering. I really started to understand what it meant to send your child to a public school, one that had a high poverty and EL population. I’ll admit I started feeling some self doubt.

Its not a secret that I’m a huge supporter of public schools. I believe that they are learning labs for our whole society and therefore they should reflect that society. The lessons learned outside of the classroom are just as important as what’s learned in the classroom. It’s my view that we are stronger as a nation when all children attend public schools. Those make fine intellectual thoughts but the reality of what that means in relation to your 5 year old child is a whole lot different. I’m ashamed to admit that for a couple minutes I allowed fear to take root in the pit of my stomach.

That’s the beauty of our public education system though. It is not there just to educate the child. Our schools serve as a vehicle to educate the community as well. Under a system designed by reformers I could send my child to a charter or private school where everybody looked like her and had the same economic background and all the while spout off about diversity and how important culture is. It wouldn’t be honest though and it wouldn’t help my child and I grow. Public Schools force me to confront my fears and dispel them.

Public schools make us interact and learn to overcome our prejudices’. Trust me I don’t like for one second admitting that I have a moments hesitation in placing my child in a truly diverse environment. It doesn’t jibe with the narrative I’ve created for myself, but if I’m truly going to raise my child to be the best person possible its important to show them that we all have misconceptions and unfounded fears that we need to conquer. I guarantee that when Avery leaves for middle school in six years I will have a completely different perspective. That’s the beauty of public education.

I had lunch with the local head of Teach for America last year and she made a statement that resonated with me. She said its important for wealthier white parents to remember that the poorer child of color is not in the school to be your child’s cultural experience. When I initially heard that I agreed and thought it was an important tenet to remember. After spending several months reflecting on it, I disagree. That child is there in part to be a cultural experience for my child and my child for that child. They are going to need that experience in order to keep a future society functioning in unity and not further stratifying. Denying that as part of a child’s education reduces the role of public schools to just factories for teaching measurable skills. It plays right into the privateers argument.

Avery had a good first day. She learned a lot from her new teacher. She made several new friends, some with names she couldn’t pronounce but she’ll learn to. She was especially fond of being able to go to the cafeteria and choose her own lunch. They won’t all be this good though. I anticipate that she’ll have some bad days in the future. That’s all right because that’s how we grow. Growth is seldom possible without discomfort.

Schools should be a reflection of life. There are days that are filled with joy and there are days of self doubt. There are days that we practice our vocabulary skills and there are days we hone our problem solving skills. I reflect back to days when I thought I wasn’t  learning a single thing only to now realize the importance of what was being taught. Public Schools are big, messy, cumbersome frustrating entities but then so is democracy and both are essential to a high quality life. In that spirit, I  just want to take a moment before we head out on this journey together to give a big thank you to Avery’s current teacher and principal and her future ones. Its only been a couple of days but I think she’s in pretty good hands and I wouldn’t want her anywhere else.