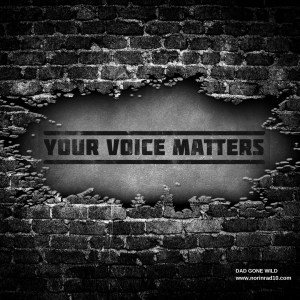 Last night I talked with a fellow traveler on sobriety road, and per usual talk turned to AA. I explained to him that while I don’t attend meetings like I used to, I am eternally grateful for the tools that were given to me through AA. Tools that didn’t just allow me to get sober, but also to live.

One of the biggest tools that I use on a regular basis is the playing of the movie forward. AA teaches that before you drink, you need to play the movie forward in your head. Think about the consequences of your decision and where your actions will lead you. It’s a tool to hopefully allow you to make better decisions. It’s a tool that many in Nashville should probably utilize right now.

Nashville is presently in the midst of one of the most important conversations in its history, a conversation about the role of race. What’s going on with our schools is not just going to have an impact on students and families, but it’s going to spill over and affect how we interact as a community. Those interactions will define us as a city for future generations. That may sound like hyperbole, but I believe it my heart and it’s something nearly everybody I talk to agrees on.

As such, we really need to stop and play the movie forward. We can keep stacking race cards and microaggressions like bricks in a wall, but that only destroys us as a community. We can hammer our tent posts in the ground and hold fast to our positions – it’s all about race/it has nothing to do with race – or we can acknowledge that there are elements of truth in both statements.

You can’t win a fight unless you define what a win looks like, so for either side, what does a win look like? From my view, a win looks like the board not renewing Dr. Joseph’s contact, but in as respectful a manner as possible, and the community coming together and choosing an interim director that breaks from tradition and sends us on a different trajectory. Do you realize that it’s been at least 20 years since MNPS has had a homegrown director of schools? That said, I understand that my vision may not be the vision of everyone.

Some are willing to fight tooth and nail for Dr. Joseph, while others want him fired today. But what does each of those movies look like if you play them forward? Will either lead to good outcomes? Not just for our schools, but for our city as well. Race relations in the Northeast, where Dr. Joseph and myself come from, have led to very fractured communities. Communities were people only interact with people who look like them and are suspicious of others.

I coach 4th and 5th graders basketball through the YMCA. In that capacity, I try to drill into my team the importance of working as a team and attacking the basket by moving the ball from teammate to teammate, until you can take the high percentage shot. They struggle with this. They continually either want to take the ball and drive to the basket on their own or launch three-point shots from outside the key. Neither strategy results in a lot of scoring. The same holds through for MNPS. Either Dr. Joseph is taking the rock and trying to drive singularly to the hoop only, to be blocked at every turn, or they are launching long-range shots that regularly clang harmlessly off the rim.

A common theme that runs through all criticism of Dr. Joseph’s performance is that it doesn’t focus enough on his actual performance and instead traverses off into conspiracy theories of criminal conspiracies. In a conversation yesterday, I was taken a bit to task for my continual suspicions of criminal wrongdoing by the MNPS leadership team. Ironically enough those who are quick to accuse critics of trafficking in conspiracy theories are also quick to embrace the conspiracy theory that there is a cabal of white people intent on ensuring that Dr. Joseph fails solely based on the color of his skin. Both theories likely have elements of truth, yet neither side has offered up definitive evidence.

At some point, the city has to come together as a team and start moving the ball towards the hoop. That’s going to take people recognizing that there are very significant criticisms against Dr. Joseph that are rooted in fact – priority schools, HR Report, demoralizing of principals – and that there are elements of racism in running throughout the entire conversation. Neither admission is going to make everybody comfortable, but I would offer, does growth come without discomfort.

I’ve heard some call in to question Nashville’s credentials as a progressive city. The proof will be in the pudding. Will we huddle in the corner, scared to have a conversation about race lest someone call us a racist, or will we step up and have this hard conversation realizing that none of us are without sin?

I’ve had conversations with members of the African American community who believe that having a conversation is pointless. In their eyes, racism is so ingrained in people that they are unable to excise it from their being. Therefore, these community members embrace Dr. Joseph’s unapologetic confrontational tactics. The argument is put forth that for too long, members of their community have been told how to think, feel, and perceive things, and they’ve reached the saturation point. They are willing to turn a blind eye to any shortcoming of Dr. Joseph. Not unlike Trump supporters, criticism of Dr. Joseph is perceived as a criticism of themselves. I get that, I really do. But what’s the rest of that movie look like?

I’ve had conversations with white people who believe no matter what happens, the African American community is just looking for an opportunity to throw the race card. They’ll point to instances where they feel they’ve tried to embrace equity, but black people don’t want that, they just want special treatment. Much like the never-Trumps, they latch on to every single micro offense and inflate it. To a lesser extent, I understand that argument, but again, what does the rest of that movie look like?

At some point, we are going to have to rewrite the script. We have to find a path forward that allows the road to converge instead of continually splitting. For that to happen, we are going to need some leadership. Leadership that can’t step forward soon enough.

There is so much going on with MNPS that it is easy to overlook happenings on the state level. Make sure you keep up with TNEd Report so you are abreast of all the issues. The big head scratcher for me right now is Speaker Casada’s appointment of admitted sex offender David Byrd to the position of Education Administration Subcommittee Chair. Yesterday Casada once again defended Byrd and in response to being told that the woman who accused Byrd of sexual assault had been ostracized in their community, he responded, “If it’s important, and it is —  it’d be important to me if I was raped, I would move.” There ya have it.

Vouchers continue to haunt the halls of Legislative Plaza like the ghost of Christmas past. Word on the street is that on Friday, newly appointed Commissioner of Education Peggy Schwinn told DOE employees that vouchers were not a priority for the TNDOE. That doesn’t preclude somebody else from making them a priority for themselves though. I’ve heard rumblings to keep an eye on other departments, especially transportation, and that the push may come from there and take the form of a bucket of money for ESAs. ESAs, which by the way, are particularly susceptible to fraud. 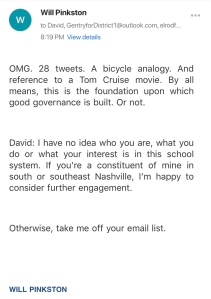 Last night MNPS board member Will Pinkston was up to his usual shenanigans. A teacher, a parent, an elected official – all make up the personal fiefdom of Will Pinkston. A fiefdom that only he is capable or qualified to evaluate. Any others who dare to offer counter opinions are fair game for attack. But like a classic 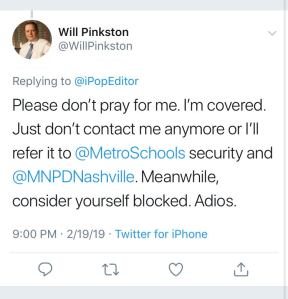 childhood bully, when counter punched he runs away with a cry of, “I’m telling mom!” Or in this case, “I’m calling the cops!”

I suspect that at the root of this childish behavior is that, just like an athlete who’s coming to an end of a storied career, Pinkston is realizing his days of influence are numbered. It’s been nearly a decade since Bredesen was Governor, and no one cares anymore. Abetted by Pinkston’s advice, it’ll be at least another 4 years till another Democrat rules the statehouse.

Pinkston gets celebrated as a warrior in the fight against the privatization of public education but the reality is that he is akin to Nathan Bedford Forrest of whom noted historian Gary Gallagher wrote:

Historian Shelby Foote’s widely quoted view that Forrest stood alongside Abraham Lincoln as one of the war’s “two authentic geniuses” defines hyperbole. Forrest was an excellent cavalry officer who vexed Union forces in the Western Theater. His many admirers claimed he should have been given far greater responsibility, perhaps even army command. But Forrest lacked the administrative skills, temperament, and intellect to lead an army. Nothing in his record suggests he could have succeeded in operational or strategic planning and execution.

Yep… it’s fairly easy to draw parallels between Forrest and Pinkston. At a time when the MNPS can ill afford distractions, Pinkston offers nothing but. He’s such an effective recruiter for charter schools that one can’t help but wonder if he isn’t a machurian candidate. Oh well… let the countdown begin.

Earlier in the week, Phil Williams of New Channel 5 ran a story listing the salaries of top MNPS personnel. It’s placed quite a few people in an irritable state. Rightfully so. Compare the list with the MNPS pay schedule and quite a few questions come up. Some questions about AP salaries that appear off of the pay scale can be explained by whether the said administrator is an 11 month or 12 months paid employee. The math for a 12 month would be the salary divided by 221 and then multiplied by 261. That doesn’t mean that there aren’t problems though.

Congratulations to Wright Middle School‘s principal, Dr. Sharada Deaton on being selected for the Fulbright Leaders for Global Schools Program. Over 70 administrators from across the country applied for this program and only 10 leaders were selected.

In the credit-where-credit-is-due department, MNPS did a much better job today in communicating with families about inclement weather plans. Finally, something to build upon.

Lately, on social media, you’ve probably seen the blitzkrieg of charges that teachers are not engaging in the science of reading.  Our friends at TNTP are particularly complicit in this attack. Well, P. L. Thomas, an EdD Professor of Education at Furman University in Greenville SC pushes back against that big fib. Those who have studied the history of education, and specifically the ever-recurring reading wars, know that there has never been a decade in the last 100+ years absent political and public distress about a reading crisis. Thomas goes on to list a number of reasons why the fib is misleading,

I encourage you to read the whole piece.

Dad Gone Wild is always here to support teachers, parents, and students. In that role, we welcome any submissions. Drop me an email at norinrad10.com. Thank you for your support. Make sure you check out the Facebook page.