Home › Uncategorized › NO. THE WATER AT MNPS SCHOOLS IS NOT SAFE.

NO. THE WATER AT MNPS SCHOOLS IS NOT SAFE.

On Monday of this week, Phil Williams, an investigative reporter at News Channel 5, produced another damning report on lead levels present in the water at Metro Nashville Public Schools. I believe this is the seventh such report that he has produced on the subject, and all of them have been equally damning. The reports do not include speculative information nor reports that are open to interpretation. What is reported are actual numbers from water tests produced by people hired by MNPS. Numbers that can be easily interpreted by a simple Google search.

MNPS took the commendable action of having the water tested in its oldest buildings 2 years ago. Predictably, results came back that showed high levels of lead in several of our older schools. Schools that are made up of children from immigrant and impoverished homes. Schools like my children’s school.

Instead of taking these numbers, acknowledging the problems, and rectifying them, the district chose to issue a press release that disclosed none of the results and served as a congratulatory letter for merely testing the water. When they were challenged on the results and the lack of action, they issued another statement that claimed “The drinking water in the district’s oldest buildings meet all federal and state lead drinking water standards.” Sounds great, huh?

Let’s take a deeper look at that statement. The EPA has set a level of 15 ppb as an action level. Does that mean everything under that level is considered safe? Not according to the EPA, and I quote a recently produced Lead and Copper Rule Revisions White Paper:

Although public discussion often mistakes the action level as having significance in terms of health impacts, EPA has consistently emphasized that the health-based maximum contaminant level goal (MCLG) for lead in the current LCR is zero and that there is no safe level of lead exposure.

Well, that seems to take the question out of the debate. But what kind of health impacts are we talking about? We all know that these days, everything is dangerous. Once again, a simple Google search shows the following:

Lead is toxic, and if it makes its way into the still-developing brains of young children, many of the effects can be permanent. Lead can change how signals are passed within the brain, how memories are stored, even how cells get their energy, resulting in life-long learning disabilities, behavioral problems, and lower IQs.

Well, that doesn’t sound good, does it? In light of this, I refer to the press release issued by MNPS in response to Mr. William’s latest report:

The water testing that our district began in the summer of 2016 was a new and untested process for us as a district. Every step of the way, we have worked in tandem with water quality experts to obtain samples, review the data and implement best practices. This entire program has required learning and adjustments as we go since there are no requirements for school districts to test for lead and there are no standards in place for school districts.

I’m not sure who wrote this, but surely they didn’t think this through before releasing it. Yes, it’s true that the district has never tested water districtwide in the past, but to suggest that the process of testing water for lead is some kind of cutting-edge science is disingenuous at best. It’s been a recommended action for over 15 years that schools test drinking water for lead, and while many schools chose to ignore that recommendation, use that pesky Google search again and you’ll find that schools across the country are now confronting the issue. MNPS is not Neil Armstrong taking a stroll on the moon here.

The whole “learning and adjusting” claim is just ludicrous to me. What is there to learn other than the actionable level and the safe level? What adjustments are needed? It’s a simple equation: lead levels over 1 ppb equals bad and requires rectifying. Simple. Why would we possibly need a “standard” to dictate what is safe and unsafe?

There is no standard in place for my child to play in traffic either, but common sense tells me that if I allow them to do so, they run the risk of getting hit by a car. So, I assess the situation, and I rectify it. I don’t adjust by saying, “Well if he plays in traffic in the early afternoon or mid-morning, he’ll probably be all right because traffic is only heavy in the early morning or late afternoon.” No, I don’t let him play in traffic at all, and we shouldn’t let our children drink poisoned water at all either. 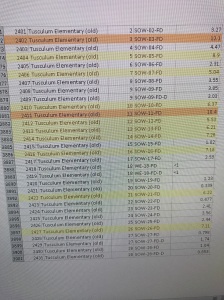 Last week, I received a copy of the results from the summer’s testing at the old Tusculum ES, which is now the McMurray Middle School Annex. It appears to me that there are a whole lot of results over 1 ppb in this report and several double digit numbers. Based on what we know, do you think that water at McMurray Middle School Annex is safe to drink? I know, it is below the federal action number, but do you believe it is safe?

In their press release, MNPS felt it important enough to inform us of this:

We are parents. We work in these buildings. We send our children to these schools. Above all else, the safety of our students and our staff has always been and will always be our first priority. It is a trust we do not take lightly. There is no way we would knowingly leave a potential safety risk to our students and staff uncorrected.

Last week, State Representative Mike Stewart held an impassioned press conference denouncing the state for potentially putting children at risk by sharing their data with charter schools. MNPS Board Chair Anna Shepherd signed her name to a strongly worded editorial decrying the risk to students if the district complied with state law and shared students’ directory data with charter schools. And yet there is not a peep from anyone, save State Representative Jason Powell, on the very real danger of high levels of lead in student drinking water. Apparently fighting charter schools takes precedence over keeping our kids safe.

When I shared the above numbers with a high ranking district official last week, their reaction was to voice concern because Phil Williams was seen at a local school filming kids on the playground.

“Stop poisoning our kids, and he”ll stop filming,” I responded.

“But you can’t film our kiddos,” they explained.

Apparently, though, it’s all right to expose them to the dangers of lead, as long as you don’t film them.

Kudos to Phil Williams for continuing to pursue this story despite the collective shrug by city leaders. Mayor Barry has not issued a single statement on the issue despite issuing several statements that promised to protect immigrants and their families. The Tennessean has largely ignored the issue. Even the Nashville Scene, despite its writers recognizing the severity of the situation, has offered very little coverage.

UPDATE 9/28: Phil Williams did was able to ask Mayor Barry about the MNPS drinking water situation yesterday. She vowed that, “Whatever they need to make sure that this will be safe drinking water is what we’ll do.” The entry of the mayor’s office into the conversation is a very welcome development and one that gives me optimism that something will actually be done.

The district released a beautiful, heartfelt public statement in response to recent policy changes initiated by President Trump over the summer. In the statement they reaffirmed that “Metro Nashville Public Schools wants to reassert our belief that all school-aged students should have access to an excellent education, and thus access to enhanced opportunities, without regard to their immigration status or the immigration status of their parents.” Take a look at the demographics of those schools with the highest levels of lead in the drinking water and ask yourself is MNPS walking the walk or just talking the talk?

MNPS has got to take action and fix this issue. We are making our most vulnerable students even more vulnerable, and it should be objectionable to everyone. I can’t say it enough. This quote from the Center for Disease Control reiterates it as well:

The adverse health effects of lead exposure in children and adults are well documented, and no safe blood lead threshold in children has been identified.

Like Loading...
‹ MONDAY MORNING BLUES
TEACHER OF THE YEAR, THE POWER OF MCQUEEN, TEACHER POWER, AND POLL QUESTIONS ›