I hope everyone had a wonderful Father’s Day. We took a trip to Burgess Falls for a breathtaking hike. The falls were spectacular. We followed the hike with a Father’s Day brunch on the square in Cookeville at a place called Char. The food was excellent. Later in the evening we joined family friend Dave Holden for dinner at Burger Republic in Lennox Village. Unfortunately his family was still vacationing out west but other then missing them, it concluded about the best Father’s Day a Dad could ask for.

There are two more of MNPS Next meetings scheduled for this week. The first is Thursday at Hillsboro HS. Food is served at 5:30 and the meeting starts at 6. If for some reason you can’t make one of the meetings, you can take the survey that dominates the meeting online. What prevents you from doing both is a question I can’t answer.

Things may appear to be quiet on the school leadership front but there are quite a few principal changes going on. Here’s a list of the ones I know of and the reason. They are in the order I can think of them.

It’s a list about half as long as last year, but we’ll keep an eye on it to see if it grows.

Has anybody heard any updates on collaborative conferencing? MNPS teachers have been working for several years without a contract. Due to the loss of collective bargaining, the only way to rectify that was through collaborative conferencing. The last I heard, training, which is part of the prescribed process, had taken place and things were ready to move on to the next stage.

This week is the English Learner Summit in Nashville. I don’t have a lot of details other then it’s from the 19th to 22nd and I want to go. 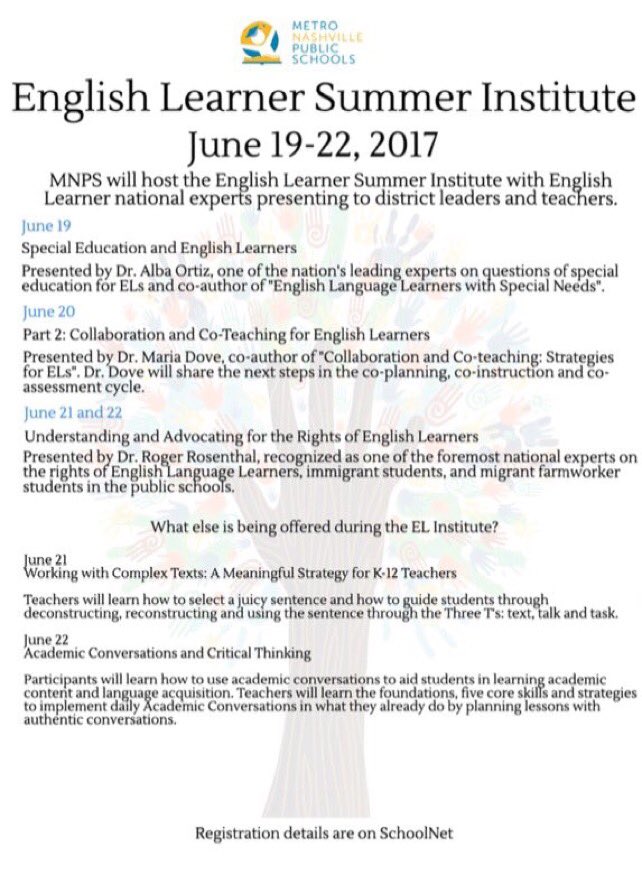 I’m hearing reports that the AP confusion that erupted last week is in the process of being cleaned up and there should be some clarity in the next week or so.

Great progress continues to be made on Tusculum ES’s new building. However, if one was to look too closely

at the drive way at the front of the building, it would seem to mesh nicely with the old building, almost as if planned. That’s probably just me being suspicious since David Proffitt, ‎MNPS’s Director of Facility Planning and Construction, has gone on record promising that the old school will be demolished next summer. Now you stop that! No eye rolling allowed.

As part of the change to leadership structure, the new position of executive directors of school support and improvement (EDSSI) – not to be confused with the web site ETSY, where people sell homemade goods. These positions were created to support the new community-based organizational structure and the district’s four community superintendents. Last I heard there were still 2 positions left to be filled and at that this time  nobody has received their specific assignments. It is the middle June, perhaps somebody should make that a priority. Maybe once a new org chart is released we’ll get some more clarity or when the districts number 2 returns from Puerto Rico with his also district employed wife.

Things continue to be heated in the land from whence they came. Several Prince George County School Board members are calling for an investigation into school system wide corruption. There seems to be evidence that graduation rates are being monkeyed with, imagine that. This is why it is so important to always stay vigilant and to conduct constant reviews. It is much more difficult to fight this stuff when it is entrenched then it is to fight it before things reach critical mass. I hope school board members are monitoring this story seeing as we now have a bunch of the folks that were in PGCS leadership from 2014 – 2016 that hold MNPS positions of leadership.

Two things I learned this week. One, don’t share a post on social media if you can’t include a picture, and two, summer camps are not a burning topic of conversation. Responses were significantly down this week and hopefully that’s not a sign of people losing interest. Let’s look at results.

Based on question one’s answers, it is clear that we love our Nashville Zoo. Thirty-four percent of you said it was your favorite place to take the kids. It’s long been a favorite of the DGW family and I have often said an annual membership is one of the best investments a family can make. If you do get a membership, I encourage adding the ride stamp for $50. The stamp allows members to ride the attractions at no additional cost and no limits. Here’s a look at the write-in answers:

Question two, asked about how your family utilizes summer camps. It seems the majority of you try to pick one big one for the summer. This one garnered quite a few write in answers.

The third question easily got the most responses. This is where I asked you to give your impression of MNPS Next and once again your answers indicated that MNPS administration has some work to do on community buy-in. Almost 60% expressed negative feeling about the meetings. These results correlate with previous poll results measuring trust among stakeholders. At some point, leadership is going to have to acknowledge that they have not build a foundation on which to launch their multitude of objectives.

I get it. Building trust and stakeholder buy-in is hard tedious work. You have to actually listen to people and actually communicate your objectives. Communicate doesn’t mean that you talk and then consider things communicated. You have to make sure people understand exactly what you are doing, why you are doing it, how you plan to do it, what is their role, and how you plan to measure success. Otherwise you are just building a mansion without waterproofing the basement. When there is a lack of a clear narrative, people tend to create their own and it usually defaults to the negative. All of this is communications 101.

Here’s the write-in results for question 3:

That’s it for the week. If you head out to the MNPS Next meting on Thursday at Hillsboro HS please look for me and say hello.

Like Loading...
‹ WHAT ARE YOU AND YOUR KIDS DOING THIS SUMMER NASHVILLE?
TENNESSEE EDUCATION VOICES: Wendy Tucker ›