RECAP ON PD AND READING POLL 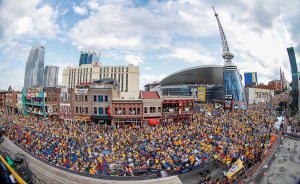 I’m still trying to digest last night’s Stanley Cup loss. Our Nashville Predators made an incredible run at the Cup, only to fall short by losing 2-0 last night to the now hated Pittsburgh Penguins. This run has been one of my all time favorite sports experiences and I’m so proud of our team. One thing that can not be lost in all of this is what an incredible community partner the Predators have been through the years. They established the Ford Ice Center out on the south side of town where many kids get the chance to experience ice skating for the very first time and are always willing to help out financially where they can. This years run really brought the town together this year and demonstrated the power of sports. I look forward to next year.

Speaking of helping out financially, I’d be remiss if I didn’t mention that my wife, a fourth grade teacher at Tusculeum Elementary School, established a GoFundMe project for flexible seating for her classroom. In her own words:

My young writers need your help!  I have been working hard this summer to help the students at my school learn to love writing in all forms and in all subjects. Students who are from high-poverty homes.  Students  for whom over 80% English is their second language.  Students who inspire with their stories, poems, and  essays.  One aspect of the Writer’s Workshop I want to be sure I can provide is flexible seating.  Giving these students a place they feel confident, creative, and safe as writers is  of up most importance.  Please help in providing us with exercise balls, yoga mats, lap desks, stools, and other spaces in which they can become authors.

I read some of their work last year and it made me laugh out loud and at times shed a tear. These are voices that need amplifying.  Any help you could give would be greatly appreciated.

On another personal note, I want to give a heartfelt thank you to Nashville’s Encore teachers and the wonderful camp experience they produced last week. They rock! This years theme was Art and the kids learned a lot, made new friends, and had a blast. If your kids get a chance to participate, I strongly recommend it.

This week MNPS will begin holding the first of 4 Next Community meetings. These meetings are being scheduled to get community feedback on,

The first meting is scheduled for Thursday June 15th at Creswell Middle Prep School of the Arts from 5:30 to 7:30. Food is provided. The next one is Saturday at Cane Ridge High School from 10:30 to 12 noon. Two more are scheduled for next week. I’ll be interested in seeing what turnout looks like, as the last “Listen and Learns” didn’t produce many tangible results. I’m hoping people are still willing to participate and don’t perceive these as dog and pony shows. And hopefully the district doesn’t conduct them as such. In case you don’t read the Tennessee Tribune, here’s a link to a recent article explaining the upcoming meetings, Metro School Director Joseph Readies 10-Year Plan for Schools.

Some have accused DGW of acting like a junior version of TMZ, so this week I thought I’d embrace that description and give you some quick hits on things we’ve heard this week.

Heads are scratching a little bit because the number 3 person in MNPS is going to be unavailable for the next 2 weeks. Now we know everybody needs their vacation time but, word was sent out that #3 would be completely unavailable for the next two weeks and would not be answering any emails. Hmmmm…perhaps the siren of home is calling. Or maybe she just need to re-charge her battery.

Word on the street is that there is going to be a new literacy sheriff in town. Shockingly, OK not so much, they come Atlanta with a previous stint in…wait for it…Montgomery County. Now this new sheriff does not have a whole lot of classroom experience, or any,  but luckily they were previously an account rep for…wait for it…Scholastic. The more things change the more they stay the same.

I’m hearing about a new policy in regards to assistant principals. If you are a AP in a building that has a principal vacancy and you apply for that vacancy, if you don’t get the position, you will be moved from your previous AP assignment to a new one. What this translates to is kids coming back to a school not knowing the Principal or the AP. Scuttlebutt is that furthermore, Principals currently are not getting to select their APs. They will be appointed one out of the pool. A pool that was drained last week and everybody forced to interview. Not everybody got an interview and it’s now a pool holding between 60 and 80 people.  Now I’ve heard conflicting information on whether or not principals are getting to select their AP, so I’ll try and dig deeper.

At Tusculum ES, the number of teachers and other employees that are suffering from respiratory infections, pneumonia, continues to mount. Last count puts it at 6 cases and rising. Probably just a coincidence that these illnesses occur after teachers spent a week packing up their classrooms in the old building. Just like brown mold, I’m sure it is all just an urban myth and moving kid’s into that old building next year shouldn’t be a concern to anyone.

I have to offer this one up to amuse MNPS teachers out there. I filed an open records request a couple of weeks ago to get a count of teachers that have transferred, been non-renewed, or quit this year from certain schools. Here’s the official count for three of those schools, per MNPS:

See, nothing to be concerned about.

Lastly, here’s one that is not a rumor. West End Middle School teacher Cicely Woodard has been named a finalist for the Tennessee Education Department’s teacher of the year award. Anybody who has ever had a child in one of her classes can attest to how deserving she is of this honor. Congratulations are definitely in order and here’s hoping she’s the state winner.

I started doing these polls out of a genuine interest in finding out what was on people’s mind. It’s never been my desire to write in an echo chamber. To say that I’ve really come to enjoy these polls would be an understatement. Sometimes I get 80 responses and other times I get over 200. Whatever the number of respondents, I always gain insight and I hope you find them informative as well.

The first question this week focused on professional development. This question is particularly relevant in Nashville because in the beginning of the year MNPS hired Tamika Tasby as Executive Director of Professional Development despite her having no experience in the field of professional development and no classroom experience.  I think it’s safe to say, she hasn’t added to that resume this year, as I can find no evidence that she conducted a single professional development session this year. Results of this weeks poll seem to bear that out as 60% of respondents said the PD they received this year was worthless and what they did on their own was more beneficial. Only 1 respondent was able to say that it was a benefit this years. That bears looking into. If professional development is as important as people maintain, we owe it to our teachers to get it right. Plus their time is too valuable for us to be squandering.

We may want to take a closer look at Guided Reading as well.

Question two pertained to a subject dear to district leader’s hearts, the value of outside consultants. Based on results from the poll, y’all aren’t quite as enamored. 58% of you answered that it was just more money being diverted away from classrooms and teachers. Those that did see their value did so with the caveat that the consultants understand the local landscape. Here’s the write-ins,

The last question, what are you reading, was just me being nosy. I was also hoping to put together a list that might lead to someone discovering a book that they hadn’t previously known about. The two most cited were Hillbilly Elegy and The Handmaid’s Tale. I love this list though:

That’s it for today. I’m about done editing my interview with state school board member Wendy Tucker. I know I’ve been promising it for weeks but I do believe it’ll be this week. Turning into George Martin. I am really liking the way it is coming together and I’m looking forward to offering it as proof that two people with disparate views on education policy can have a civil conversation. See ya soon. Feel free to send any comments to norinrad10@yahoo.com.

UPDATE 6/13: Apparently two weeks were not required as number 3 was spotted in the district today. Glad to have her back at work.

Like Loading...
‹ QUESTIONS ON PD AND READING
WHAT ARE YOU AND YOUR KIDS DOING THIS SUMMER NASHVILLE? ›