Home › Uncategorized › First Poll of May

First Poll of May

We are now down to the last 14 days of school for the year in Nashville. You’d think things would be calming down a bit, but that doesn’t quite seem to be the case. This weekend’s poll is Nashville centered, so to those of you outside of Davidson County I apologize. Next week we’ll take a preliminary governors poll and maybe take a look at some national issues.

Recently Nashville Director of Schools Shawn Joseph presented his first budget to the Mayor. In it he proposed a 3% raise and step raises for MNPS staff. The mayor warned not to expect the proposed budget to be fully funded and true to her word she came back with an agreement to fund 36 million of the 59 million additional funds requested. Barry specified that she would like the additional money to fund teacher pay increases, expand literacy and English-language programs, and invest in social-emotional learning. Earlier this week Joseph presented a proposal to the school board that would cut raises to 2%, cut in half the number of middle schools transitioning to a STEAM (Science, technology, engineering, arts and math) curriculum and entirely cut plans for improved social emotional learning in the district. He’d like to maintain the increase in funds for English learning students, reading efforts and leadership training. Teachers obviously are not happy with this proposal. I’m curious though, if it comes to pass, who do you hold responsible?

Earlier in the year Dr. Joseph announced that he would change the structure next year of how schools would be managed. Instead of having one executive director for each tier – elementary, middle, high school – the district would be split up into 4 community zones made up of 3 clusters each, overseen by a community superintendent. This is not a new idea. We’ve done it previously in MNPS and Memphis also employed the idea for a brief period. This week the four superintendents were announced. All are current employees of 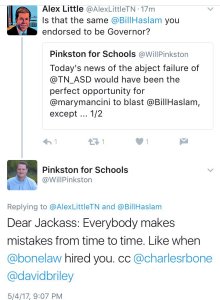 MNPS who began their tenure before Dr. Joseph and his cohorts arrived. I’m curious what you think about the new appointees.

Last night I read a twitter exchange between school board member Will Pinkston and attorney Alex Little that could have taken place in 2012. It made me think to myself, do we just talk about the same things over and over without ever arriving at solutions? Do the same people just endlessly argue with and insult each other year after year about the same things? To be honest, in my opinion, some of these topics have been talked to death and I’m starting to grow weary with them. These conversations don’t seem to result in better educational outcomes for the kids of Nashville. I wanted to know what subjects you are sick of? What educational topic should we just stop talking about for a while?

That’s this week’s questions. I can’t wait to hear your responses. As always, feel free to write in responses if you don’t see one that fits your feelings. Comments are always welcome.