Home › Uncategorized › THE SHADOW OF INEQUITY

THE SHADOW OF INEQUITY

In public education circles, we spend a great deal of time talking about equity. As much talking as we do, though, we struggle with actually defining it, and we have a hard time grasping that what is equal isn’t always fair, and what is fair isn’t always equal. We’ve all seen the graphic that illustrates the difference between equality and equity:

Recently I stumbled across a story by blogger Lara David that struck a chord with me, and I’d like to share. She has all her students sit in a circle, and she instructs each of the students to throw left shoes into the center. She then randomly begins to hand out left shoes to students. The students quickly begin to complain because the shoes are either the wrong size or mismatched. “What?” she asks. “I equally distributed the shoes. Everyone has two shoes, so what’s the problem?” Obviously, the answer is that the shoes were not the needed shoes. In order to be equitable, all students would need to have received the shoes that fit and matched. The same challenge exists in public education.

I’d argue that rigorous instruction is also often defined differently based on the demographics the school is serving. If you are in a more affluent school, rigorous instruction translates to students being challenged by a wealth of educational experiences that come through field trips, outside speakers, after school clubs, etc. Poorer schools are left to rigorously focus on doing well on standardized tests, so that they make sure they don’t get on the naughty list, which makes them eligible for state takeover and to be labeled a failing school. In doing so, we create two separate, unequal tracks for kids upon graduation. Those who have been exposed to a wealth of experiences will gravitate towards entrepreneurial and management tracks, while those focused on test results will be relegated to service and hourly positions. The inequity created in schools will follow these kids throughout their lives.

I’m not downplaying the importance of looking at both teacher quality and curriculum as it relates to inequities. But in reality, inequities run even deeper than that. My kids have attended a high needs school for a number of years now, and I reached a point where I can recognize the inequities, but I have a hard time communicating them to others who don’t have children in high needs schools. Every once in a while, though, something will happen to reveal to me in a communicable manner just how deep these inequities run and just how important it is to rectify them.

Last month, I had lunch with a man, we’ll call him Ron, who has had quite a bit of experience with schools that have portables. Ron had done some research on Tusculum Elementary School, where my children attend and my wife is a teacher, and we were getting together to discuss some of his thoughts. He started off by praising the things he’d seen both instructionally and discipline-wise. I nodded, and then he said, “But I did notice one thing.” I leaned forward thinking, “Here it comes.”

“I noticed that Tusculum has 23 portables, but no covered walkways. How is that possible?” he asked.

I was dumbstruck, and all I could do was sit back in my chair. How was it possible? How was it possible that for over two years, Tusculum ES had been utilizing these portables, and it was deemed acceptable for children to walk in inclement weather to the main building several times a day fully exposed to the elements? And that’s when it struck me: that’s how deep the inequities run.

In case you didn’t know, Tusculum ES is a school with, depending on what day it is, approximately 98% of students coming from families with incomes below the poverty level and 73% of students who are English language learners. Last count showed that only 136 kids out of 750+ kids speak English as their first language. I use a caveat on these numbers because as I’m sure you suspect, we have a great deal of mobility. Many of these children are refugees, and they came from refugee camps before coming to Nashville. So who are they to complain about a school that looks eerily familiar to them? 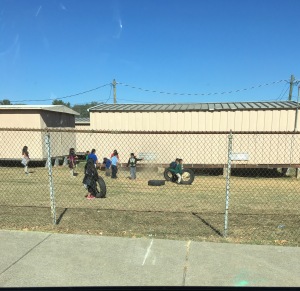 To be fair, Metro Nashville Public Schools (MNPS) is in the process of building a brand new school for Tusculum ES, and it will be beautiful when it opens. But is that where our obligation to these students end? If this scenario were to play out in an affluent school, would parents accept their children being exposed to the elements daily while a new school was being built? Or would they raise enough hell and bring enough political pressure to get covered walkways built? Don’t even get me started on the playground situation. I suspect that those parents would tolerate it for about half a day before speaking up, and I don’t fault them for that. But that’s the kind of advocacy we need for all our children.

Let’s also consider the message that we are sending to these children at Tusculum. We are telling them that they aren’t even important enough for us to protect them from the adverse weather conditions. We are telling them they are worthy of substandard facilities. All we are doing is reinforcing the messages that have already been taught to them in their home countries. Thank God Tusculum ES and most of these high needs schools have administrators and teachers capable of countering that message. But we as a community have to do a better job.

We can’t even begin to talk about teacher quality and rigorous instruction until we get the environment right. Just look at Maslow’s Pyramid. I don’t care what level of instruction or curriculum you bring, there is no way a child who is cold, hungry, or sick is going to be able to take full advantage of it. Yet we’ll look at test scores, scratch our heads, and try to figure out why these kids aren’t scoring higher. We’ll talk about whole child education, the effects of poverty, rapid language acquistion, and diversity all day long, and then daily drive right by Tusculum and not think for one minute about those kids being exposed regularly to severe weather and the impact it’s having on their development. We might even remark to ourselves how great the new school is going to look, forgetting all about today.

I’m not exempting myself here, either. I’ve advocated for the school for three years now and never once demanded covered walkways. I, like everyone else, figured the obligation began and ended with building a new school, and that there wasn’t money to make any improvements on the current school. That’s how deep the inequities run – that even someone who loves these kids and the school as much I do is willing to accept them being continually exposed to the elements daily. I won’t mince words here – it’s shameful.

Arguing that the district doesn’t have the financial resources to address the situation doesn’t hold water here either. This year, MNPS has remodeled the board room and the executive offices. Just this week, new carpet is being laid throughout central office. Why are adults getting amenities before children? Remember this statement – We believe public education exists to ensure equitable access and opportunities for all students from early childhood through graduation. Are we living it? Because a value ain’t a value unless we are living it.

Defenders of the of the budget say they were only able to do this because Dr. Joseph charged the staff with finding a way to do the central office remodel in a cost efficient manner. Somehow, through the use of in-house resources, a creative way to complete these remodels was found. Well, okay, then why hasn’t a similar challenge been issued for much needed projects in our schools? One MNPS school, Fall-Hamilton ES, was able to get school partners to chip in and make some early year improvements. But mostly, we shrug and say That new school’s going to be awesome! and then presume to judge as if all things were equal. They clearly are not.

This is not something that plagues just Tusculum either. Go over to McMurray Middle School, of which Tusculum is the feeder school, and you’ll see a similar situation. When Tusculum’s new school opens, McMurray will recieve the bulk of their portables. Here’s something to think about, 4th graders at Tusculum who have been in portables since third grade, will now go to a new school utilizing the same portables they’ve endured for the last two years. Talk about the ultimate bait and switch and a new definition of stability.

Why have we not built mobile covered walkways? These walkways could go with the portables from assignment to assignment. I fail to understand why this couldn’t be accomplished. The Nashville Public Education Foundation (NPEF) constantly reminds us about how much they care about the kids of Nashville. Are you telling me that if they decided to, they couldn’t find a private partner to execute this project? After all their mission satement is We believe every child in Nashville should have access to a great public education that prepares them fully for college, work and life. We do that through raising and managing funds, making strategic investments and bringing the community together behind efforts to accelerate progress. Time to put your money where your mouth is.

To me, it just comes down to will. These are the children who don’t have parents with political connections. These are the kids who are grateful for whatever we give them, therefore making it easier to give them less. These are the kids who, along with their families, are left to navigate our system largely unnoticed. I love that the state of Tennessee is trying to enact accountability measures before identifying needs. Per The Tennessean, “While the accountability section of the draft is strong, according to supporters of the plan, many others have felt the plan is short on specifics about how to address student subgroup needs, especially English learners.” Once again, the cart is placed before the horse, but at least they are promising to study how to meet those needs. I guess that is a start.

My 6-year-old son’s friend is a refugee child who attends Tusculum. He was out to lunch with us this week, and the kids were laughing and joking back and forth. As I watched them and looked specifically at my son’s friend, I started to get a vision of just how stacked against him the deck was. His pathway through adulthood is so much more perilous than my son’s is. We like to say kids can do anything and that poverty isn’t destiny, but how are we helping to that a reality? My feelings weren’t pity, just a deep facing of reality, and it saddens me. He is a bright, witty, energetic young man who has so much to offer. We need to be taking obstacles out of his way and not be placing more impediments in front of him. We can’t do that unless we really confront the inequities in our schools in an honest, rigorous manner.

As we head into the 3-day weekend celebrating the life of Martin Luther King Jr, I would like us to consider his words when he said, “Everything that we see is a shadow that is cast by that which we do not see.” It is imperative that we shine a light on all the inequities that are not normally recognized, whereever they may hide.