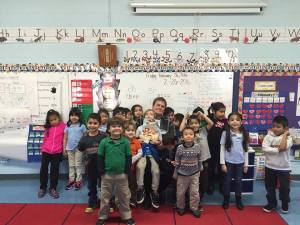 I moved to Nashville in August of 1989 from northeast Pennsylvania. As the child of an Air Force father and a resident of the Northeast, I was used to being surrounded by people from many nationalities. The Nashville of 1989 was a bit of culture shock for me. There were a few Mexican restaurants and maybe a Thai place, but otherwise, the ethnic food landscape was pretty barren. The reason being that Nashville’s immigrant population was very minimal at that time.

I remember trying to find pierogis and having to drive across town in the middle of the night because someone had spotted Mrs. T’s in the frozen section. Then there was the time I took some friends to the Italian restaurant in town and they wanted beans with their lasagna. In deference to my wife, Nashville was the home of Vanderbilt University, so children who grew up in its vicinity were exposed to children from around the world, but there were not the thriving communities of families from South America, Asia, and the Middle East who now call Nashville home.

Nashville today is represented by cultures from all over the world. While the majority of the population still identifies as being white, that number has shrunk from 79.5% in 1970 to 60.5% in 2016. The foreign-born population tripled between 1990 and 2000, from 12,600 to 39,500. Nashville is home to the largest community of Kurdish people in the country. We’ve had as many as 60,000 Bhutanese refugees settle in the area. Refugees from Burma, Syria, Iraq, Nepal, and countless other countries now call Nashville home. It’s a little amazing that a city whose major claim to fame is country music has become this eclectic burg.

Obviously, this has been both a gift and a challenge to Nashville schools. Take my own children, for example. When they started the school year, back in August, a fair amount of their classmates did not speak English. So while we were thrilled that my son, who was starting kindergarten, was making friends with children from Thailand and Burma, there was also concern that he would get the instruction he needed in order not to fall behind. The same held true for my first grade daughter. Luckily, their school has some exceptional teachers, and both have thrived while having the unique opportunity to be exposed to various cultures in an authentic manner.

That doesn’t mean that I am under the illusion that my children are receiving an equitable educational experience to those in less diverse schools. Tusculum Elementary School, where my children attend, at is made up of a large percentage of immigrant and refugee children whose parents are still navigating the corridors of society, let alone trying to figure out how to support their children’s educational needs. That is not a criticism or excuse; it’s a reality. That means due to state and federal testing mandates, every possible minute must be devoted to improving math and reading skills, lest we be labeled a “failing school”. That translates into some things being sacrificed.  Things like after school clubs, field trips, special performances, and some extracurricular activities are not as readily available as they would be in other schools.

Tusculum Elementary School was recently identified by the state of Tennessee as being a school in the bottom 10% for achievement. That’s a shame because I personally believe that list paints an inaccurate picture of what is happening at TES. I’m not alone in this thinking, as the newly passed Every Student Succeeds Act recognizes the need for deeper classification of EEL students and includes provisions to create more accurate evaluations. For example, Tusculum currently has 18 T1 (Transitional 1) students and 12 T2 (Transitional 2) students, K-4 students who have tested proficient overall (5.0) and in literacy (5.0). This means in 2015 (T1) and 2014 (T2) they tested proficient and no longer receive daily EL services. That’s a big achievement, but by and large, it goes unrecognized. This is not a unique problem to TES either and one hopefully ESSA will help address.

It is a challenge to get the general population to recognize the breadth and depth of our demographics. We tend to think the words “English learner” and “Spanish” are interchangeable. We tend to think that “refugee” and “immigrant” mean the same thing. We forget that a parent’s educational level is crucial, and that different points of origin mean different levels of education and different perceptions on the value of education. In order to better educate our children, we need to better educate ourselves. It all translates into a multi-tiered endeavor that requires multiple strategies without a whole lot of precedent.

Adding to the challenge is the uniqueness of Nashville’s EL population. It’s not like we can just go copy what New York, Boston, Los Angeles, or even Charlotte-Mecklenburg is doing. They are all similar, yet extremely different, than what we face in Nashville. New York, Boston, and Los Angeles all have immigrant populations, but not the refugee numbers. Charlotte-Mecklenburg, which has the refugee numbers but not quite the breadth, is the closest to Nashville, but has benefited from the implementation of dual language immersion in its schools. Unfortunately for Nashville, that is not presently an option. In other words, we need to do a little inventing of the wheel here for what best suits us.

Last year, Metro Nashville Public Schools EL director Kevin Stacy and Chief Academic Officer Jay Steele, spurred on by School Board member Will Pinkston, recognized the scope of the issues and started to strategize on how Nashville could best tackle them. Luckily, they realized that this was a challenge that you could not import an answer for, nor could you have outside experts come in and have them implement a plan. This was something that would have to come from the local experts. The ones who were actually out in the schools doing the work. Thus, the EL Council was formed. (Now, I’m sure there was more to the formation than that, but my writing is already too long. So in the interest of brevity, this is how I’m telling it.)

The EL Council is made up of educators from across the district at all levels. They have met monthly for the past year and formulated a strategy to bring a better educational experience to all our children. Somehow, God knows how, but I’ve managed to wrangle an invitation to participate in these meetings and have come away impressed. Kevin Stacy has brought as many voices as possible, sometimes 40 to 50 people at a time, into the conversation, and given them free reign in terms of input. These educators don’t always agree, and sometimes they say things he doesn’t want to hear, but together they’ve created an impressive plan and a budget that could serve as a blueprint for the future.

We could sit here and pick apart elements of the plan all day, but in my opinion that would do a disservice to those front liners who crafted it. Early on in the process, the School Board chair put a mandate on implementing solutions with a proven track record. The problem with that is, as noted earlier, we are in unchartered waters. However, our educators have made some impressive in roads.

It is a federal requirement that all schools make yearly increases (called Annual Measurable Achievement Objectives) in the percentage of students who are learning English. We have made progress this year by exceeding the language growth and language proficiency goals set by the State. Also, we made our achievement goals for Algebra I, English II, grades 3-8 math and graduation rate. The state goal for growth or progress in English was 39.7%; MNPS achieved 48.3%. The becoming proficient in English goal was 4.7%; our district achieved 9.4%. In my opinion these numbers serve as evidence of qualifications to create a plan.

As with other elements of the proposed budget, there has been criticism that this is just more top down management. That is not an accurate charge, and in some ways, it is insulting. This was not something brought down from central office and sold to educators. Educators from across the district sacrificed their time, which, in reality, is a commodity more valuable than money, and collaborated on a plan that could meet the most needs in the most fiscally prudent manner possible. This plan represents practicing educators voicing what they believe is needed.

There are also some who question why there was not more representation on the EL council of charter school teachers. I’d answer, EL instruction is not what they do best. No charter school has the number of EL students present in our south Nashville schools. Charter Schools certainly have been included in the plan. STEM Prep was awarded one of the three new “Newcomer Academies“. People need to recognize that collaboration doesn’t meant that you are always the teacher. Sometimes being the learner is just as important. I’m sure that they will play an important role in the implementation of the plan but for true collaboration to work, they need to be willing to take guidance  from those that have been working with EL students on the largest scale for the longest time.

The plan calls for a blend of more teachers, better professional development, and more technology. It calls for increased ease of access to Registration and Initial Assessment of language proficiency. This will assist families new to the US when transportation may be a hardship and provide equity and access of our NELB families in the registration and assessment process. This ease of access could lead to the identification of more children who qualify for ENCORE, MNPS’s gifted program as well. The lack of minority students identified as “gifted” is well documented, this could perhaps provide a means to begin to combat that.

Another important component is a pay increase for 56 parent outreach translators.This past year we have lost 11 translators due to Nashville’s competing job market and other agencies paying higher salaries than MNPS. This increase would raise them from a pay grade 6 to a pay grade 7 which is approximately a 10% increase of their salaries. Considering that last year parent outreach translators did translations on 9,164 documents and did 120,988 interpretations, I think this is pretty vital.

This is a ambitious plan but is it a perfect plan? Unlikely. Is it transparently and thoughtfully constructed? Definitely. Will it work? I think so. It’s my personal belief that MNPS is at the beginning of a process that will not only benefit the students of Nashville, but will also serve as a potential blueprint for districts across the country. The English Learner population is only going to grow. More and more districts are going to find themselves in need of a strategy, and Nashville is doing the heavy lifting to make one available. We owe it to our dedicated and hard-working educators to give them the support they need to make this a reality. Instead of carping on all the reasons it may not work, we need to focus on ensuring that it has the support needed  to succeed.

In closing, I’d like to give a big thank you for those three men, Pinkston, Steele, and Stacy, for having the foresight to get the ball rolling. I’d like to thank all of the EL Council participants for their dedication to making the plan a reality and allowing me to observe the depth of knowledge and commitment present in our district. I’d also like to hopefully thank Mayor Berry for recognizing the need and the expediency of this plan and approving the financing. All school budget issues come with an underpinning of politics, and we need to keep those at bay and recognize where the work has come from. It is work like this that makes me forever grateful that in 1989, I made the choice to come to Nashville and that this is where I will raise my family.