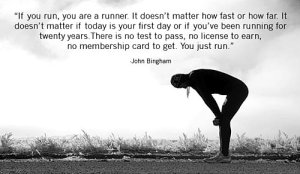 Over the last several years, I have made the transition from non-runner to runner. My monthly totals these days vary from 50 miles, during less inspired times, to 100 miles, when I’m really feeling it. When I first started running, I began using Nike’s running app to measure my distance and to give me a sense of progress. Like everybody else I thought it’d be good to know how far and how fast I was going. But a funny thing has happened.

You see, it started with a simple app that measured time and distance and kept a running total for a benchmark. But then it progressed to enough of a dependency to justify getting a top-of-the-line Garmin race watch because, well, dependence on data requires more data. Where I once was only concerned with how far and how fast I ran, I am now measuring footfalls, cadence, and several other categories that a) I don’t know exactly what they mean, and b) I wouldn’t know how to change them even if I knew what they meant. I imagine that my running has gotten better over the years, but I attribute that to running more and trying to eat better, not measuring my cadence and footfalls. My sense of accomplishment has certainly not grown; in fact, I’ve noticed a weird phenomenon.

If I head out on a run and one of my measurement tools isn’t working, I’ll either quit the run or proceed without the measurement. The weird part is, that if I continue the run sans measurement, it’s almost like it didn’t happen. I’m going the same distance. I’m burning the same miles, but for some reason it doesn’t feel real. When I look at the data for the month, those runs cease to exist and any progress I might have made is discounted. When I compare my results to friends I “compete” against, it almost feels like I’m lying about those results.

I’ve also found that there is a loss of why I started running. It originally was for the sense of accomplishment and my overall health, both mental and physical. There is no chance that I will ever qualify for the Olympics, but that doesn’t mean that I can’t reap benefits from my 9:36 mile pace or even a 3-mile run. Do you know that sometimes I will pass up a run because I can only run 3 miles, and, well, that doesn’t add enough to my monthly totals? It’s impossible to measure the effect a run has on my mental state, so that becomes a secondary reason for the undertaking. These are all symptoms of data addiction.

Data addiction is a phenomenon that is not isolated to just running, and actually over the last several years has permeated our whole society. It rears its heads in the weirdest places. For example, I remember when I was managing a nightclub in the early 1990s, and we got a breathalyzer machine installed. We would spend hours after closing trying to see how high we could get the machine to register. The machine would measure something that was previously immeasurable, and we pursued those results relentlessly. In essence, the pursuit of data was altering our behavior. And that’s what is happening in our schools.

We started out measuring a few key indicators, and then we became addicted. We got some useful information from a few measurements, and then we decided that anything we could measure was worthwhile. We started increasing our testing to the point where teachers were doing as much measuring as instructing. When we cited things that couldn’t be measured as evidence that our schools were good, it felt like lying, so we stopped doing it. We gave lip service to the notion that art, music, and industrial skills are important, but our actions said otherwise.

It’s funny, addicts behave the same no matter what they are addicted to. It starts with a little pleasure, and then quickly becomes all-encompassing. It leads to lying about the copious amounts of consumption and the true intentions. Quiz any official and they will blame all the testing in schools on someone else. The state blames it on the district, while the district blames the school, and then the school eventually lays the blame at the feet of the state. It’s a never-ending cycle in which no one is truly honest. Think I am stretching things? Talk to a few parents. They seem to have a better handle on the effects of this increased zeal for data then so-called experts.

We also say that standardized tests are for the good of the child and that we are preventing minority children from slipping through the cracks, the opposite is actually true, but I ask you, how many people have cited that one test back in 7th grade that opened the door to learning for them? Until they took that test they were lost in the wilderness, but that test inspired them to greatness. Now substitute test with book or mathematical concept, and I bet you get a different answer. By putting emphasis on learning for the measurable we are actually restricting people’s potential. Like when I fail to take a 3-mile run because it doesn’t add significantly to my monthly totals, similarly, students will potentially fail to partake in opportunities to learn because it will produce no measurable results.

Data addiction also leads to putting undue pressure on suppliers. Let’s face it, that is what we are turning our teachers into, data suppliers. Our teachers are under a constant barrage to deliver more data. They are losing valuable time and sanity trying to meet the ever-increasing need. They are in an endless churn to produce more data under the threat that if they don’t, we will replace them with people who can, though we never mention a viable source for these replacements. Perhaps there is a teacher orchard producing an overabundance of quality teachers willing to work for decreasing pay and autonomy that I am unaware of.

Our thirst for more that is measurable has reduced the art of teaching into that of a producer. We’ve lost sight that teaching children is more than just about instruction in reading, writing, and arithmetic. Think about the teachers who had a profound effect on you and your growth. Do you remember them because in fifth grade they had you reading on a seventh grade level, or is it deeper than that? Is it because you felt that they cared for you and were truly vested in helping you understand your place in the world?

My friend JC  told me a story the other day about a friend of his growing up who lost a parent while in the 7th grade. The only reason this friend was able to make it through that school year was because a teacher provided him with comfort and guidance. That’s the stuff that doesn’t show up on a standardized test, but does make a real impact on a child’s life. We like to say it’s all about the kids, but as JC observed, these days we have our teachers under so much pressure to produce and so busy being accountable that they don’t even have time to express care and love for a child. That’s just wrong. Teachers are so much more then just data generators. 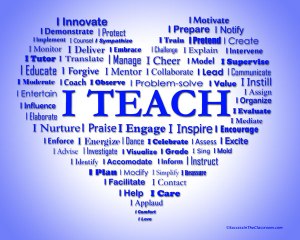 Which begs the following question: If we are trying to instill a love of learning in children, how can we do that in a facility that is joyless? How can we expect teachers to convey the wonder of learning when they are miserable because we have demanded so much from them? Child psychologists have long preached that stress in the home produces negative effects. Why do we not think the introduction of ever-increasing rigor in classrooms would produce similar effects?

I never like to go for a run when I have less then an hour. The stress of making sure that I get done in time robs me of the pleasure of the run. There is no time to explore alternate routes or rest if I’m not as strong that day as other days. On those days the negative consequence end up undercutting the positive. It’s the same thing that happens in our school. The relentless drive to produce results undercuts the joy in learning that is needed to create life long learners.

It’s even worse in our high poverty/high English learner schools. The pressure is even higher here because they are dealing with children who are coming to the table challenged. It’s like this: If I was coaching a football team, would I have more success if the kids entering my program had been on a high-protein diet and lifting weights for the last five years, or with the kids who’ve been undernourished and never seen the inside of a weight room? Which team would I want to coach if my family’s livelihood depended on just wins and losses? If a caller to a sports radio show can grasp these concepts, why can’t our education policy makers?

Yet we fail to acknowledge these basic concepts, and instead we drive our teachers so hard to produce that few last longer than five years. We replace those who leave with even more inexperienced teachers in facilities that are inadequate at best. We communicate to teachers and principals a sense of urgency yet fail to apply that same sense of urgency to ensuring that technological and staffing resources are provided. The result is the creation of the most unstable environments for those who require the most stability. All in the pursuit of more data and a false sense of accountability. I say false sense of accountability because our data chase has produced no evidence of success, as this chart show. 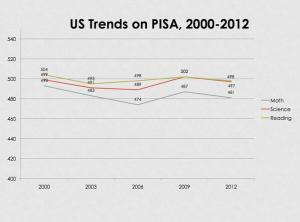 .
The first step to fixing a problem is admitting that you have a problem. It’s like me with my running. I’ve started leaving the watch at home every once in a while. I occasionally just run for how it makes me feel. Unbelievably, those miles still count. I still burn the same amount of calories. Truth is, I actually feel a little better. I notice more and more, my mind actually constructs ideas while I’m running and I’m able to think critically because I’m not tethered to just chalking up data. That doesn’t mean I’ve thrown away my Garmin and Nike + app, I just try to be a little more discerning with their usage. I can’t help but think the same would apply to our schools if we just slowed down the data churn.

It’s time to recognize that all children have different challenges and skill sets. It’s time to recognize the importance of culture and the environment upon a child’s growth. It’s time to remember that teaching is an art form as well as a skill set and that even a teacher who is perceived as average can have a profound effect on a child’s life. We also need to remember that the child of today is the adult of tomorrow. Leaving the world a better place than how we found it used to be as important as being a high achiever. I personally believe that still rings true.