Home › Uncategorized › The Race For Mayor Heats Up

The Race For Mayor Heats Up

As we move into June here in Nashville, more than just the weather is heating up. With a little over two months remaining until election day, things are also heating up with the mayor’s race. This is the first time in eight years that the mayor’s race doesn’t have an incumbent in the running, so it’s a chance for a real change in direction. In a recent Tennessean article, candidate Jeremy Kane called attention to a recent poll that showed education is fast becoming the leading issue in the upcoming election. In the article, he attempts to draw a line between himself and another candidate, Bill Freeman, painting them at opposite ends of the spectrum on the issue of education.

I’m a little unsure as to why he chose Freeman to compare himself to, as there are other candidates who have positions that are as equally varied. David Fox has all but promised to throw the gates wide open for charter schools and prescribed a more involved role for the mayor. Megan Barry has a moderate’s view of public education that seems to support public schools but at the same time leaves the door open for more charters and more mayoral control. In looking at their web sites, Charles Bone, Linda Eskind Rebrovick, and Howard Gentry all apparently don’t think education is important enough an issue to stake a position on or, at the very least, publicize it. Though it should be noted that Bone has political operative John Little, formerly of the Tennessee Charter School Association, working for him. That should give a little indication of his position.

I can only surmise that Kane chose Freeman to compare himself to because polls have Freeman leading the race and Freeman has recently picked up the endorsement of the Metro Nashville Education Association (MNEA). Freeman has positioned himself as being a champion for the public school system, pledging to give the elected school board the support and resources needed to continue to improve the city’s educational opportunities. He’s also embraced the idea of community schools. Freeman has a tendency to talk more about ways “we” can solve our education challenges as a community than ways “he” can solve those issues, so that would be one place where they are polar opposites.

In attempting to draw a line in the sand differentiating his plans from Freeman’s plans, Kane draws attention to his experience as the founder of a charter network in Nashville, LEAD Public Schools. LEAD, by certain measures, has been very successful, and Kane should rightfully be proud of their accomplishments. Two years in a row, LEAD has had their entire graduating class accepted into a four year college, though there is a discrepancy between the number graduating and the number enrolled as freshman at LEAD. They’ve produced exemplary test scores on the state’s annual TCAP tests. But are the results really all they are portrayed as being, and are they scalable?

If we base our inferences off LEAD’s record, let’s talk about what we could expect Nashville’s education system to look like with Kane as mayor. Well, right off the bat, we better get ready to do some fundraising because that is something LEAD Public Schools is very good at and pursues very aggressively. They have a donor list that is as deep as it is wide.

Through an open records request, I was able to secure that donor list, which includes amounts given to the school. Very impressive. This year, the philanthropy budget is for 1.3 million dollars. Hmmm… I don’t know about your neighborhood school, but mine doesn’t have that kind of budget. So I’ll have my work set out for me. Just for the sake of contrast, Freeman has spoken of raising the MNPS budget by 1%, and combining that with increased business involvement through community schools.

Next, we’ll have to get used to a whole lot more involvement from the State. You see, LEAD is very involved with Tennessee’s Achievement School District, and is, in fact, one of their prime charter operators. It’s interesting to me that last year when the ASD was in the process of taking over one of our public schools in Nashville, Kane wasn’t bonding with the community and helping defend the school. No, he was collaborating with ASD head Chris Barbic on how they could make the whole transition more palpable to people in the community. It’s equally interesting that one of those people, Representative Harold Love, recently sent out endorsement letters for Jeremy Kane.

I find that a little troubling. In my mind, the person controlling the funding to Metro Nashville Public Schools (MNPS) – the mayor – should at least believe in the community’s ability to face their education challenges. If not, what’s the point? Let’s just turn the whole system over to the State. It sends the message that we are only capable of educating kids who aren’t living in poverty or who are English language proficient, which, in my opinion, is just wrong. The mayor owes it to the city to invest in the future of all its children and not just the selected ones.

Let’s look closer at some of those results that LEAD touts as successes. Career educator and education blogger Gary Rubenstein did just that around recent claims regarding Brick Church College Prep, a LEAD School. Rubenstein quotes what Barbic said in a recent article:

“One of those three schools on the right trajectory is Brick Church Pike College Prep in Nashville, which is slowly being converted into a charter school run by LEAD Academy. Barbic says if Brick Church matches this year’s student growth in math and reading, it would leap into the top quartile a year early.”

Dig into the numbers a little bit and the reason for this becomes apparent. The ASD has a mission of taking the bottom 5% of schools into the top 25%. Well, that is a lot easier when your incoming kids don’t fall into the bottom 5% to begin with. Despite having a ‘growth index’ around 0, those scores look respectable. It allows Kane and LEAD to create the narrative of doing something extra special, when in fact they haven’t.

Then there is LEAD Middle School. Last year, they were given a letter of academic concern. 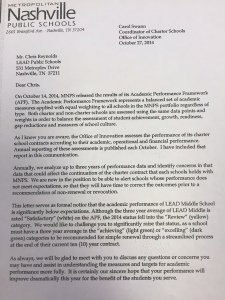 This week, LEAD petitioned the school board to consolidate its enrollment across its schools. Which is a fancy way of saying, “Can we close our middle school because it’s really hard work and it’s dragging our overall scores down?” Now, to be fair, LEAD has promised to help those displaced students find homes at other LEAD schools, which, for some, will be closer to their homes. You have to wonder how many of the lower performing students will make that transition, and I share school board member Amy Frogge’s concern:

“I worry about the precedent we’re setting. It feels to me like a game, you know the numbers. They’re shutting down the grade levels not doing well so they can promote their performance at other schools.”

LEAD has also employed a very aggressive recruitment plan. South Nashville has a large population of refugees. As typically happens, many of these refugees tend to take up housing in the same apartment complex. LEAD has made it a practice of going into these complex’s and telling these refugee families how bad their zoned schools are and even promising free iPads if they enroll their children at LEAD instead. Local teachers collected affidavits and turned them over to the MNPS’s Office of Innovation. I followed up on these complaints with the Head of the Office of Innovation for MNPS, Alan Coverstone, and he responded that he had looked into it and as long as they delivered the promised iPads, he was good with it.

Is that what we want from our mayor? Someone who looks to outside entities to face our challenges? Someone who games the numbers to give the appearance of better results? Someone who is willing to provide exceptional service for some but not all? Someone who allows others to do the hard work while they face the lesser challenges and claim greater successes?

Taking all factors into consideration, a picture emerges of a policy that assigns more value to the narrative then to the reality. That’s the choice Nashville faces in less than 90 days. It is a choice that is going to shape the future of our city and play a major role in whether we continue to be an “It” city or not. For me, it’s pretty clear, but for everybody else, I hope we make the right choice. Just because you own a car doesn’t make you a mechanic.