Home › Uncategorized › The trouble with expectations.

The trouble with expectations.

“We know that when students with disabilities are held to high expectations and have access to a robust curriculum, they excel,” Duncan said.

That quote above has had me walking around jaw dropped for about two days. Many other people, much more qualified then I, have written amazing pieces about the sheer insanity of that statement. (http://www.huffingtonpost.com/peter-greene/arne-duncan-special-education_b_5532681.html) So I am not even going to add to that chorus, because I recognize the limits of my voice. What’s jaw dropping to me though is the slow realization that education reformers truly believe that we all have the same voice and that its just expectations and opportunity that keep us from realizing it.

As I walked around Monday trying to process this, I asked my wife, a teacher, “Do they really believe every child is capable of getting a 21 on the ACT.” “Uh Huh”, she answered. She gets a little tired of talking education with me sometimes because she lives and breathes it every day, so her answers aren’t always the most in-depth.

“No really I said. They believe everybody’s got the same potential, its just expectations and opportunity?”

“Are they familiar with Mendel? Multiple intelligences?”

I wandered off feeling like Darwin must have felt when he first brought up the theory of evolution. To me it’s a non-sequitur. We are all individual people, each of us capable of individual feats of greatness and weakness. To try and deny that fact is like arguing the world is flat. Would I look at a child and say “I expect you to run a 100 yard dash in 4 seconds because I’ve seen people do it.” Would you expect every child to be able to paint a masterpiece, because people have done it? Again ludicrous.

I’ll give you another up close and personal example. My 5 year old daughter last week tested to be eligible for the gifted program in kindergarten. She tested a 96 percentile in math. Needless to say we are pretty proud, but lets look at the reality for a minute. At home we have no expectations for her in regards to what she should know. Our only expectation is that she be intellectually curious and that she welcome the different experiences we try to expose her to. I said when she was born, and when her brother was born, all I want is for them is to not to be afraid of life and be able to tell a story. If they master that, the rest will take care of itself.

Neither her mother nor I have an infinity for math. Now her grandfather is an associate dean of engineering at Vanderbilt. I think its a pretty safe bet that he’s pretty good at math. So its probably likely that she inherited some math genes from him. We put her in situations that unlock those genes but again, I think its a pretty good bet that genes play a bigger role here then expectations.

Her brother on the other hand shows a greater propensity towards athleticism and reading. He’s only four, so that’s a guestimate. The point is, should I have the same expectations math wise for him that I have for her? Should I expect her to physically match him? That’s just dumb. Thy are two different individuals with the same value no matter what level they perform at. The only expectation I will have for them is that they be intellectually curious and open to different experiences. They will develop their own talents and own level of accomplishment.

We also would like them to develop the ability to self motivate. The goal being that they perform at the level of their capabilities independent of our expectations. Our little interpretation of grit, which is another theory I find fascinating. Reformers expect kids to learn grit but not practice it until they are out of school. See, developing grit doesn’t entail hunting around finding the school that is the perfect fit, making sure you always have the best teacher, always having parents push, ensuring child is never bored and other things that I often hear advocated. In fact, I think those things work against grit.

As a kid I went to the Pennsylvania Governors School of the Arts. One of my fellow students was a phenomenal guitar player. His schedule would be, get up around 6 and play an hour of guitar, go to HS, at lunch play an hour, come home from school play until dinner, after dinner, play another couple hours. He did that every day. Week-ends he probably spent all day playing. He was such a good player that he got a scholarship without ever being able to read music. He was crazy good and from what I hear, he’s had a very successful career as a chamber guitarist.

I guarantee you that he did not score a 21 on the ACT. In fact, he probably dragged down the composite score for his high school. My father could look at an engine and without ever having seen it before, or looking at the instructions, repair it. I’ve known dancers who choreograph incredibly intricate performances but struggle with mathematics. I’ve got friends who are amazingly gifted carpenters yet are incapable of, and frankly unconcerned about, close reading. These are all talented individuals that based on our current assessment modes, would be considered not college or career ready. They would also drag down their schools composite scores.

On the flip side, I’ve got a dear friend, who probably scored a 30 on his ACT, who developed a drinking problem and until recently, after getting it under control, was incapable of keeping long term employment. Another friend who did exceptionally well on his tests and went to a “good” school, had a wife who ran off with the plumber and left him in such a state of depression he couldn’t function for five years. Then there are friends who have scored exceptionally well yet can’t hold jobs because they thought your scores were the only thing you needed to secure and maintain employment. There are those who can and have, only to slowly realize, that a good job isn’t necessarily the key to a well lived life.

My point here is that life is messy and full of variables. Excessive testing, data collecting and yes high expectations are all attempts to even out that messiness. They are ill conceived attempts to try and assure a promising future when there is no way to insure such promises. Instead of telling children that they can be just like everybody else, we should be teaching them to appreciate the differences in everyone and how to use those differences to live a well rounded life. We should be creating environments were children feel safe enough to take risks that enable them to find their strengths and seek out assistance with their weaknesses.

That’s why I’m in favor of your good old fashion Liberal Arts education. Expose children to everything so that they can actually discover where their talents lie and they develop the ability to learn. A school’s mission should not be to create the workers of tomorrow but the citizens of tomorrow. The beautiful part of this theory is that it has a history of working. America has never been among the leaders on standardized tests but for over a hundred years we have remained among the top in economic development. That’s a body of evidence in my opinion.

When our children were born, my wife kinda scoffed at my expectations for them. She accused me of having co-opted a t-shirt saying. However, think about a world where people weren’t afraid of life. They’d embrace the messiness instead of trying to eradicate it or harness it. The ability to tell a story certainly makes us more interesting and I ‘ll take interesting over productive any day. Both of these skills would allow us to develop our true intelligence and not just the one that a consortium or a chamber of commerce finds useful.  Hopefully someday soon our educational leaders will grasp that thought and embrace the concept of multiple intelligence and let go of the theory that the world is flat. 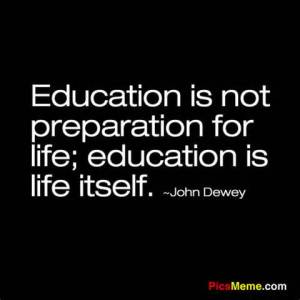