Welcome Back From Friday News Dump 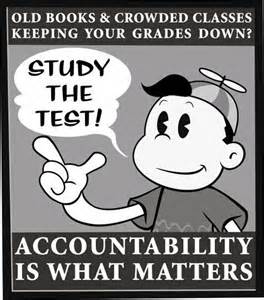 Hope you had a wonderful Memorial Day week-end. It was a good time to spend with family and remember those who have fought for our freedom. However let’s not forget those who would give it away. Let’s continue taking a look at those delayed test scores that magically got completed at 4 pm on a pre-holiday Friday. Yes, the old holiday news dump.

In PR and journalistic circles either Friday or better yet the Friday before a holiday week-end is the time to announce any unpleasant business. The hope being that it’s the end of the week. The news cycle is over for the week and anybody who might read it will forget about it until the next week. The bet is something more pressing will also come up. Over the years this has become a pretty successful practice.

Unfortunately we now live in the internet age. What a three day week end now means is a little extra time to do what we kids used to call, surf. I did a little looking around and a little Googling. Funny thing, Tennessee wasn’t’ the only state having trouble getting those test scores out on time. Louisiana was having issues as well. (http://www.shreveporttimes.com/article/20140521/NEWS0401/305210041/Late-state-test-scores-schools-scrambling) It also seems like someone else utilizes the Friday news dump as well. (http://louisianavoice.com/2014/05/17/learning-is-more-than-a-test-score-but-john-white-still-tries-to-cook-the-test-score-books-at-rsd-but-doe-staffers-refuse/)

Very interesting, but with in itself that might not be a big deal, but lets take a minute and see why it may be a big deal. First we’ll start with the two heads of the respective education departments. Louisiana’s head is John White a former Teach for America Corp member and a graduate of the Broad Superintendents Academy. The Superintendent for Tennessee is Kevin Huffman a former Teach for America Corp member. They both are members of Chiefs for Change.

Who are the Chief’s for Change you may ask. The Chief’s for Change are an organization made up of seven state chief superintendents of education who have tasked themselves with the mission of putting children first through bold, visionary education reform that will increase student achievement and prepare students for success in college and careers. Now there used to be eight but Tony Bennett got caught rigging grades.(http://www.slate.com/articles/news_and_politics/do_the_math/2013/08/tony_bennett_education_an_astonishing_act_of_statistical_chutzpah_in_the.html)That didn’t get Bennett kicked out of Chiefs for Change though. They just gave him emeritus status.

Who else has emeritus status you ask? Well there is Chris Cerf. Cerf was the superintendent in New Jersey who passed all kinds of mandate’s on standardized testing and then left to take a job with Amplify this February. I guess there is money in testing. There is also former Maine Education Commissioner Stephen Bowen who led the passing of Maine’s first ever law allowing the establishment of Charter Schools. Though I will say that Mr Bowen’s resignation would offer a wonderful template for Mr. Huffman. You get the picture of what memberships in Chiefs for Change represents.

Tennessee and Louisiana are also two of the three states that have special “achievement” districts. These are state run school districts charged with the task of taking the bottom five percent of schools and moving them to the top 25% in five years. In Louisiana they call it the “Recovery School District” and Tennessee is a big fan. So much so that they consider themselves partners. Chris Barbic has often admitted that the ASD is very proud of their partnership with the RSD. This comes despite the myriad of problems the RFD has  created and the fact that it hasn’t been very successful.(http://deutsch29.wordpress.com/2013/03/05/new-orleans-recovery-school-district-the-lie-unveiled/)

What reformers have discovered though, is that achievement districts are a great way to get more Charter Schools. Converting to Charter operators has proven to be Barbic’s preferred method of moving these “failing” schools into “high quality” schools. States like Texas, New Jersey and Kansas have all shown an interest in getting in the achievement school district business. That’s a lot of potential markets opening up. I’m not saying that’s a goal but it sure would be helpful if tests told the right narrative. There is a lot of money, I mean “student success” riding on it.

Let’s recap now. Two ex-Teach for America corps members as education commissioners. Two commissioners with membership in an exclusive group that includes members previously accused of fixing test scores. Two states with special school districts that really need to show improved scores to justify other states adopting their reform methodology. Two states with test results delayed and individual school districts not notified until the last minute. Lastly but certain not least, two states that release those results on the Friday before a three holiday weekend. Remember what I previously said about perception being nine tenths of reality?

Again all this may be coincidence. As Williamson County Schools superintendent Mike Looney told the Tennessean, “”We’ve been tremendously concerned about the proficiency at which the department communicates to [local school districts] but that doesn’t necessarily mean that something nefarious happens with the process,”. True, but that doesn’t mean something nefarious is not happening either. That’s why transparency is so important. Had the Tennessee Department of Education had a history of being transparent this might not be such an issue. However that hasn’t been the case.

It’s been my experience that you can get away with being non-transparent if everything is running successfully. If people’s anecdotal experience is bearing a close proximity to what your telling them, they usually won’t force the issue. However when that isn’t the case people will start taking steps to force transparency. In my opinion that time is now. The Tennessee Department of Education has had the privilege of operating on a need to know basis for too long. Its now to a point where we all have a need to know.

We need to know what the actual results to these tests are. We need to see our children’s actual tests. We need to see how the cut scores are computed and we need a hearing to insure that nothing nefarious is transpiring. Mr Huffman has demonstrated an unwillingness to talk to parents about his reforms. Therefore its time for legislators to step in. Will someone please make Mr Huffman stand before the general assembly and explain just how this all came to be. We are not accusing, just asking for the suspicion to be lifted.