Home › Uncategorized › Once again its testing time in Tennessee

Once again its testing time in Tennessee

This week marks the beginning of testing week in Tennessee. All week long students will be taking the annual TCAP assessments. These tests will establish their worth, their teacher’s worth, their school’s worth, their state’s worth, their countrie’s worth, and… well you get the picture. These tests are so important that people feel the need to create pep rallies, special festivals and even video’s to relieve some of the pressure. Initially I saw the one above on the Tennessee Department of Education web site but before writing this post I perused YouTube and probably found 100 more.

That’s over a hundred video’s dedicated to celebrating a test. Yes, I said test, not a school, not books, not learning in general. They celebrate a test. Think of all the resources that went into producing those pieces that could have been applied to actual learning, not to mention the creativity wasted. Some of them are quite creative and had that creativity been applied to inspiring actual learning as opposed to doing well on a test, been quite valuable.

Yesterday I attended a carnival dedicated to celebrating the upcoming TCAP tests. There were bouncies, games and free food, all dedicated to the glory of the upcoming test. A teacher friend of ours would have attended but she had to run off to find a camouflage shirt. Seems her school is doing some kind of presentation that requires the wearing of camo. So she was spending Sunday afternoon searching out something that she has as much use for as I do an extra nipple. An extra nipple that she would purchase with her own hard earned cash.

Later I started reading my Facebook thread and found out that Little Leagues across the state have suspended their schedule for this week so as not to conflict with TCAP. Apparently during the rest of the year its perfectly fine for kids not to get home until after 9 but not testing week. Too much is riding on these exams. We can’t go messing them up with games.

To make things even crazier. Teachers and administers spend the week ahead of testing making the environment as sterile as possible. They cover up all artwork on the walls. Take down any pictures. All the work that goes into making a school a joyous learning place goes out the window for test week. After all we’ve got to focus and we can’t have any cheating.

All of this leads me to ask…WTF? Pardon the French, but am I the only who seems to think this is absolutely ludicrous? We are creating an environment that apparently is so toxic for our children that we have to create special rules and distractions to counter that toxicity. I know that I don’t have any fancy degrees nor have I ever set foot in a classroom as a teacher, but I can’t see how that’s a good idea. I mean if my kid puts his hand in a fire and it burns him, I tell him to get it out. I don’t make up skits and tell him jokes to take his mind off of it.

Since we’ve deemed these tests are so important that they’re worth putting our children through this you would assume that Tennessee’s Education Commissioner has some reassuring words. Well maybe if you find these words reassuring,  “But TCAP, I think most educators would say is inherently not a very strong test, not as strong as what we’re aspiring to do because, ya know, it’s a multiple choice test and, um, it doesn’t have significant critical thinking or problem solving… ”. Apparently strong enough though that we insist on subjugating our children to severe discomfort for it. I don’t feel very reassured. 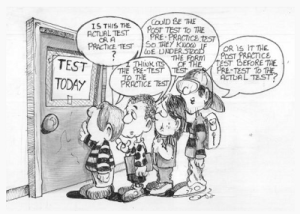 Culture is extremely important. In my family we are trying to create a culture of lifelong learning. Learning is something that is always an adventure even when its difficult. We try not to put emphasis on testing as something other then a measure of progress. In other words its a ruler not a goal. It’s something we will expect from the schools we entrust our children to. We want you to inspire them, not distract them with “Frozen” parodies.

However, that’s not what’s being instilled in our schools. There we are creating a culture that says everything proceeding the test is preparation for the test. Gone is “Be true to your school” only to be replaced by “Rockin TCAP”. If a child learns something that can’t be measured, that’s a waste of time. It doesn’t help validate the school, teacher or child’s worth. We need to get rigorous! (Sorry had to sneak that one in. I’ve learned that if you don’t use rigor in everything you write, no one will take you serious on education.)

This is sending us down a very dangerous path. When what we do is shaped by a test instead of the test measuring what we do, the immeasurable falls by the wayside. Time spent on the arts is replaced by reading time. Reading time becomes something you do to increase a test score and not to get lost in an alternate world. It may make us become more efficient people but does it make us become more interesting people? Ask China. They’ll probably have some insight on the value of doing well on a test and why they’ve changed their focus.

I’ll admit, I watch these test video’s and I am horrified. Other’s find them cute and counter with the argument, “They’re so stressed and anything I can do to relax them I’m going to do.” That’s nice and I certainly appreciate the sentiment, but when does it stop. When do we say “No I am not going to try and cover up these actions that are detrimental to children.” If we keep helping kids relax, when do the powers that be stop attaching more consequences to these assessments?

One of the stated purpose of these tests is to help make students college and career ready. How do these tests aid in that? Imagine if for 8 months out of the year you labored at your job and then got taken into an isolated room and tested for two days. Your salary and position were all contingent on those tests, independent of what you’d done for the last 8 months. I doubt many of us would embrace that career path.

Here’s another real world application for you. I was fortunate enough a long time ago to have a teacher instill in me that you don’t have to know everything, you just have to know where to find the answer to everything. How often in your career do you say, “I’m not sure about the answer to that. Let me research it and get back to you.” If you are at all successful, probably pretty often. Where in TCAP or even PAARC is the measurement for that ability?

If that doesn’t happen and things continue down the path we are on, parents will just have to opt out. Its really that simple. Anytime I hear a story of a 7 year old breaking down in tears because of the pressure placed on them to demonstrate the knowledge that they are supposed to have accumulated, its crystal clear to me that we are not creating life long learners. Parents, as their child’s advocate will have to form the last line of defense. Lets hope it doesn’t come to that.

Like Loading...
‹ A good legislative session
Why does the head of the Tennessee Achievement School District say the things he does? ›