One of the reason’s we purchased our house in the Flatrock area of Nashville was because it was important to us that our children were raised in a diverse environment. I’m not talking about “its a small world” diversity here either. I wanted them to be exposed to all aspects of different cultures. AA has a saying, “If you like every alcoholic you’ve met then you haven’t met enough alcoholics.” I think that holds true with people in general.

We’ve been here eight years now and this neighborhood has been everything we desired and more. We have met so many people from so many different backgrounds that its mind boggling. Everybody from the neighbor next door who’s been here since birth to the guys that run the corner market who hail from Yemen. Everyone of them with a unique experience to share. Experiences that I think some where missing out on. We’ve watched the neighborhood grow. Initially when we moved here there seemed to be more division.

Going back 8 years ago, I was at a community meeting and people were discussing things we could do to bring the community more together. Mary Lou Reynolds leaned over and quietly said to me, “We should do a festival.” I replied, “I’d be up for it. I got a history in event planning. You write the grant, get us some money and I’ll organize it.” I thought nothing more about it. Little did I know, Mary Lou was one of those quiet but deadly ones.

Two months later she called and told me that she’d submitted a grant to Metro Arts and would I mind accompanying her to the interview portion. Still skeptical I said sure. I’d like to say we slayed it but that wouldn’t be true. Fact is, we had an inside source that believed in us. He saw the potential and for that i’ll always be grateful to Jonathan Saad. We recieved a grant for $500.

I’ve always maintained that they gave us that grant as much to re-prove their theory that neighborhood groups don’t complete things as it was to host a festival. Whatever the reason, we now had to put on a festival and we needed more then $500. At that time, we had no idea where we would get money from or how much the local business community would support us. Luckily we live in the same neighborhood as Rick Harris and Walker Lumber.

They were the first we approached and we explained that we wanted to host a festival that used art and music to celebrate the history of the neighborhood and welcome the new residents. That was enough for them, they became our first official sponsor. It was now time to get the community involved. 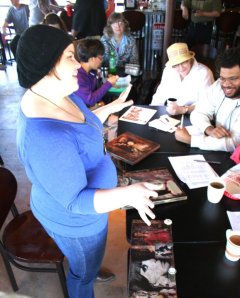 We scheduled our first meeting not knowing if anybody would show up. If I remember right, we ended up with about 20 people. One of them was a long term resident who wasn’t so enamored with me but was extremely enamored with the neighborhood and doing things for the hood always came before personal feelings. Little did either of us realize that this was the beginning of a life long friendship that has enriched my life beyond description. I will always be grateful to Debbie Young for her support.

Another person at this meeting was someone I can’t remember a time of not knowing. Irene Kelley is an established artist and real estate agent who has continued to share her talents both on stage and in securing our performing artists. A tireless supporter of this neighborhood no matter how daunting it can be. The level of talent we’ve enjoyed would never have been possible without her. Few community festivals can boast of a member with the kind of ties she has, but then again you never know until you start talking.

After the meeting I remember thinking, I think we have a festival. Debbie and Irene teamed up to beat the bushes and start bringing money in. The Council Lady at the time, Anna Page, brought Vanderbilt Hospital at 100 Oaks into the fold and we started building a festival from scratch. The congregation from New Song church became an integral part. The folks at Our Lady of Guadalupe gave us a place to meet and helped us reach out to the Latino community. People joined in from all over the area. The whole idea was to build something that truly represented the neighborhood.

The meetings that year were among some of the best I’ve ever been at. We had people from the Latino community, the Kurdish community, new residents and long time residents all throwing out ideas and trying to make them happen. I tried to run these meetings as organized chaos. No ideas were outright rejected. If neighbors wanted this, we’d find a way to make it happen. I used to tell them don’t let the thought of success or failure concern you. If things all fall apart, we’ll just fix it next year.

That first year we had 6 bands and 15 artists. We had about 4 food vendors and about 700 people showed up. One of the people that showed up that year was Bill Pratt, the owner of Southeast Automotive. He enjoyed himself and his contributions over the years are too many to mention. I’ll never forget successfully walking the fire inspector through his inspection and then turning around and seeing some Mexican neighbors cooking  over an open fire under a tree or the Somalian band waylaying me about not being able to go on even though they weren’t scheduled to play.

People often say they want diversity but let me tell you diversity is hard. Language is not the only barrier. Each culture has a different way of approaching things. Time means different things to every culture. In order to really bring diversity together you have to be willing to be both flexible and patient. I think the reward is worth it though. 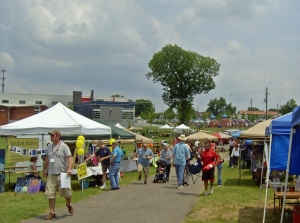 That day I watched diverse neighbors work together to celebrate their similarities. People showed up in the morning and just started setting up. I remember standing on the hill overlooking the grounds and just being amazed at how people just assumed tasks with no one barking orders. Through the meetings they’d gotten a sense of each person worked and communicated. At the end of the day, graduates from Glencliff in the 60’s and 70’s policed the grounds like they hadn’t been out in the hot sun all day. It was inspiring.

Equally inspiring, was the reaction in the community. Everywhere I went for the next couple of weeks people were discussing the festival. How much fun it was. How great it was to see neighbors. How much they were looking forward to next year. I got a lesson in just how much an event could mean to a community and how the simplest actions could touch peoples lives.

Every year since, about this time of year, we start to make the calls. To send the the emails. To make the face book posts. We’ve added things every year. A car show. A pet portion was added last year. We’ve built out the children’s portion. The last couple of years attendance has averaged about 3000 people. In the past we’ve just done the invocation in Spanish and English but after realizing that our neighborhood is more diverse then that, we’ve added Arabic. We’ve grown to host 50 artists. Last year we had 15 food vendors.  Our budget has grown to 9k and every year we start not sure of where its going to come from. It does though and all of this is possible through the hard work of committed community members.

Who know’s what ideas will manifest themselves this year. I look forward to the planning meetings as much as I do the festival itself. There’s always a mixture of old and new. Some have been with us since the start, some just a couple years and some just come to the meetings for fellowship. If you live in the area, I encourage you to join us. If not, think about starting your own event. You won’t be sorry. you never know what gems your neighborhood holds until you start working together.

Like Loading...
‹ What kind of foundation are we laying?
I know some Jr high kids that could bring some excitement to J Crew ›